A three-year-old child accidentally fell into an open borewell in Telangana’s Medak district on Wednesday.

Police and fire fighting personnel rushed to the scene to launch a rescue operation.

The incident occurred in the evening in an agriculture field in Podichanpally village in Papannapet mandal of the district.

According to police, a farmer Goverdhan dug a borewell in his agriculture field. As the borewell failed, he left it and got busy with other work.

His family members were also present in the field. His son Sai Vardhan who was standing near the borewell accidentally fell into it.

The 120-feet borewell was left uncapped which led to the incident.

District collector Dharma Reddy and Superintendent of Police Chandana Deepti rushed to the scene and were supervising the rescue operation.

The collector said they were digging a parallel pit to rescue the child, who is believed to be stuck at 25-30 feet. “We are also trying to send oxygen supply into the borewell to help the child continue to breath,” he said. 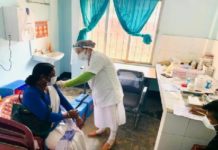