Switch to: తెలుగు
Home General 43 killed in massive fire at a factory in Delhi 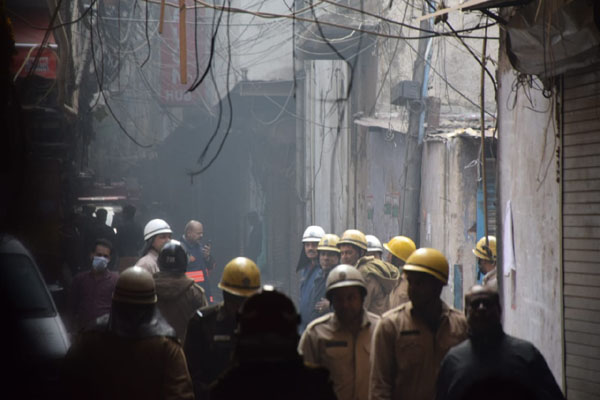 At least 43 people were killed and over a dozen others injured early on Sunday when a fire broke out in a factory in a crowded market in West Delhi’s Rani Jhansi Road area, the national capital’s Fire Service Department said.

The people who died in the fire are labourers and they were sleeping in the factory when the fire broke out between 4.30 a.m. and 5 a.m. on Sunday morning.

So far, more than 60 people have been rescued and shifted to the Lok Nayak Jai Prakash Narayan Hospital (LNJP) and Lady Harding Hospital.

Thirty four people have been reported to be dead in LNJP hospital and nine in Lady Harding Hospital, an official figure from the two hospitals reveals.

The Fire Department said that they received a call around 5.22 a.m. and 25 fire tenders were rushed to the spot. The exact cause of the fire is yet to be ascertained but the fire officials said it could be a short circuit.

At least 40 people were killed so far in the fire which erupted in a bag manufacturing factory and spread to two other nearby buildings, said Delhi Fire Service Chief Atul Garg, who claimed to have got the input from Delhi Police. The death toll is likely to increase.

Police said a case has been registered against the factory owner for operating the bag manufacturing unit from a residential area and flouting safety norms.

“Tragic loss of precious lives in the fire accident in New Delhi. My deepest condolences with the families of those who have lost their loved ones. I pray for the early recovery of the injured. Have instructed concerned authorities to provide all possible assistance on an urgent basis,” Shah tweeted.

BJP’s National Working President J.P. Nadda tweeted: “Extremely anguished by the loss of lives in fire tragedy at Anaj Mandi, Rani Jhansi Road, Delhi. My thoughts are with the bereaved families. May the injured recover quickly. Have asked BJP Delhi karyakartas to provide all possible assistance to those affected.”

The fire is said to be one of the biggest fire incidents in Delhi after the Uphaar Cinema fire which took place on June 13, 1997 in south Delhi’s Green Park area leading to deaths of 59 and over 100 non-fatal injuries.