The demonetization proclamation on November 8, 2016 by Prime Minister Narendra Modi, will be dredge up in the history of India. While Modi said it would be a passing event, a lot of people claimed that this will be a breaking point. Even though there have been many protests the citizens seem to have taken this transition obediently.

Acknowledging the ground realities in India, it was improbable that the drive for a cashless economy can alter the situation for sellers. However, 60days into demonetization sellers seem to be coping up again. Sunitha who sells rangoli colors tells Telugu360 “Sankranthi is around the corner, so from 4-5days my business is doing a little better. It was horrible before that; nobody was buying or giving change. I suffered a lot”

Bad luck relies on absolutely perfect timing and so is the case with business which started just before the big announcement. Sahara Biryani house in Gachibowli was inaugurated 7th November a day before the pronouncement of demonetisation by the Prime Minister. The owner Yadav tells Telugu360.com  “We don’t expect immediate profits but we planned for at least 6months. This demonetization was something that came out of the blue. We did not get our swipe machine on time from the bank and so had to forgo few customers. We were accepting rupees 500rupees note initially. We could easily setup paytm, after that almost 8 out of 10 transactions are happening through paytm now. From past one week there were couple of cash transactions. I hope this bad luck will make good stories for us”

The crisis did take an awful toll on the sellers. A lot of traders took the loss, understood the times and went on about with new strategies. Cashless transactions in the form of e-wallets have penetrated into almost all the places including Raithu Bazar, weekly fair, pharmacies, dairy shops, mobile repair shops, electrical stores, food counters, chai stands and general stores. 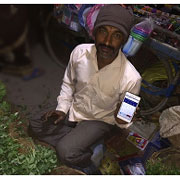 The first Rythu Bazar in Mehdipatnam has seen vendors using not only swipe machines but also PAYTM for transactions. The number of people using e-wallets for transactions in India has gone up especially after the pronouncement of demonetization.

In the words of Dasari Santosh Kumar who sells leafy vegetables at a weekly fair “I got paytm only after demonetization was announced. I do at least 10 paytm transactions per day. Only youngsters pay using paytm. I don’t know about the additional transaction charges from paytm. As of now nothing has been deducted.”

Digital wallet transactions have outnumbered credit and debit cards transactions but not completely. Venkat Reddy who runs a dairy shop tells Telugu360 “I have swiping machine and most of my customer transactions are using cards. Customers tend to give cards and not many use paytm.”

The Government in releasing its BHIM app was too late and vendors are already making the best of the private e-wallets without having to pay much transaction fees. 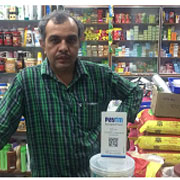 Kalish Choudhary who owns a General store in Begumpet tells Telugu360 “I use both paytm and freecharge. I do monthly around 25000 rupee transactions on each as that is the limit for free transfer to bank. Due to increasing customers for paytm, their customer service is not responding properly even though I am a KYC customer. I tried using BHIM app, but it is not up to the mark. If we have more than one bank account it is not activating. ”

While people embraced technology, there are folks who haven’t adored it. A software engineer said – “I had to pay in cash to my maid. She says she doesn’t have bank account.”

Another such instance where a vegetable seller who is in his twenties and owns an android phone, doesn’t use any app for bank transactions and purely depends on cash. When asked why he dint “I don’t understand all those apps”.

Cash still remains as king for mainstream Indians. The problem started when sellers were reluctant to accept 2000 rupee note. That’s where things got really crazy.A customer from Kukatpally tells Telugu360 “I went to buy a ready-made design for my saree, the store had change for 2000 rupees but they were using some stupid app to detect if the note is original or not. I got the 2000 rupee note from the bank. They did not take the note as Modi did not tell that the note is original.”

It was either a 2000 or a 100 rupee note, but there weren’t enough of those 100s for almost 45days after the proclamation. Now the circulation of 500rupee notes has definitely eased doing business. No sooner the demonetization was declared, people weren’t letting low denominations flow easily, however, now change is available relatively easily.

A lady vegetable seller while giving change for Rs.500 said “we can give it to one or two after that we won’t have any lower denominations left”. Another vendor who sells greens came to the rescue of customer said, “I have enough change, let me know if you need it.”

A country with over a billion people and such a drastic move by the government has disrupted their lives. However, two months into India’s demonetization initiative, queues at ATMs and banks have become short, some sectors of the economy continue struggling and the country is shifting towards cashless for basic goods and services.