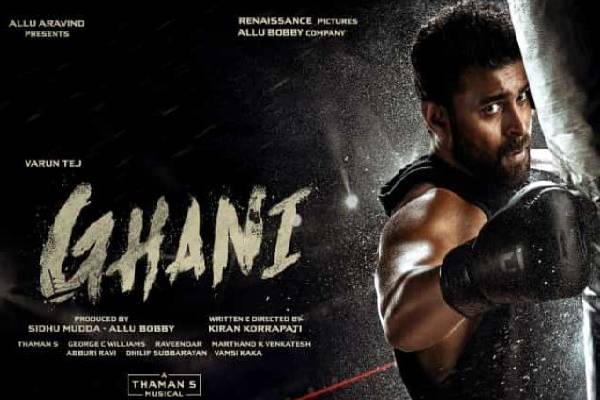 From the past one week, there are speculations that all is not well between Mega Prince Varun Tej and Kiran Korrapati, the director of his upcoming movie Ghani. A gossip portal cooked stories saying that a massive set erected in a private studio has been dismantled without shooting atleast for a day in the set. The news also said that the producers are not on good terms. Telugu360 conducted a detailed inquiry and here is what we know about this sports drama:

With the shoots stalled due to the coronavirus pandemic, the makers decided to dismantle the set of Ghani. As the daily rents that are to be paid for the private studio would heap up, the set is dismantled for now. The set work will start right before the shoot resumes. The entire set property is kept in the studio premises. There are also speculations that Varun Tej and Kiran are not in good terms. But the news we hear says that Varun Tej watched the rushes recently and he is extremely convinced with the product. He is in regular touch with the director Kiran.

Mega producer Allu Aravind is presenting Ghani. He watched the film’s content recently and hinted that Ghani would take Varun Tej to the next level. The makers are even happy with the business deals. The digital deal of the film was closed recently and it fetched a record price. The asking prices for the theatrical deals too are high and the makers are quite confident that they would make decent profits even before the release of the film.

Ghani has 40 days of shoot left and the makers are in plans to resume the shoot from the mid of June if the situations turn favorable. The climax boxing episode of 20 minutes is yet to be shot. This would feature several foreign boxers and they will reach the country after the normalcy returns. Ghani presents Varun Tej as a boxer and Saiee Manjrekar is the heroine. Kannada Superstar Upendra and Ramya Krishna will be seen in other prominent roles. Allu Bobby and Sidhu Mudda are the producers of Ghani.