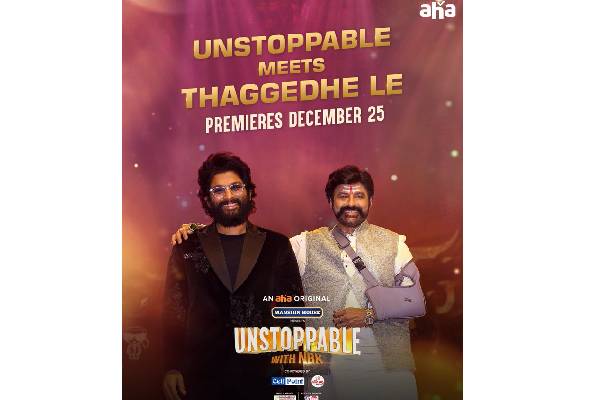 Stylish Star Allu Arjun attended the pre-release event of Nandamuri Balakrishna’s Akhanda and raised the slogan ‘Jai Balayya’ that cheered up Nandamuri fans. Before this, Balayya signed Unstoppable show for Aha which is owned by Bunny’s father Allu Aravind. The response for the show is very good and Balakrishna is shooting for the upcoming episodes. Allu Arjun attended the show as a special guest and he completed the shoot recently. The special episode will stream on Aha from December 25th during the Christmas weekend.

The recent episode of Unstoppable with SS Rajamouli and MM Keeravani received top-class response. Balayya also shot one more episode with Ravi Teja and Gopichand Malineni and it would be streaming on Aha next year. The first season of Unstoppable will have 12 episodes and Balayya is in plans to complete the shoot of the next episodes soon. Balayya will join the sets of Gopichand Malineni’s film early next year.

Gear up for an iconic episode 🤩#UnstoppableMeetsThaggedheLe 🔥

Icon Star @alluarjun & Team #PushpaTheRise are all set to entertain us along with our #NandamuriBalakrishna for a special episode this Christmas. #UnstoppableWithNBK Ep 6 Premieres Decemeber 25. pic.twitter.com/VeFzJtEv0D