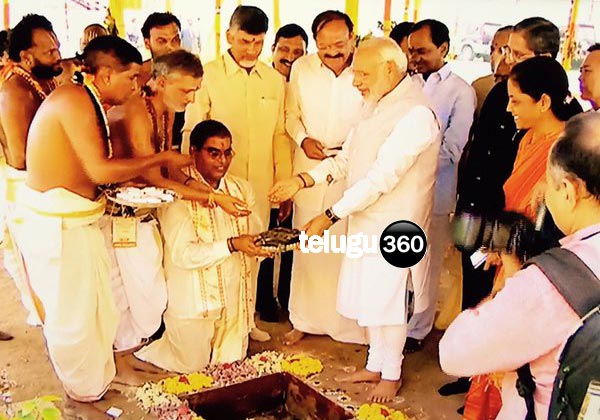 From now onwards the construction of Amaravati will be a low key affair. There won’t be any high profile functions or boasting excessively about the yet to be born world class capital. TDP supremo Chandrababu Naidu has reportedly instructed all the TDP leaders and ministers to refrain from creating too much hype about Amaravati. He is specifically asked the ministers, even his media team, no to publicize too much about the happenings in and about Amaravati. The chief minister alone will talk on the subject.

Naidu is said to have realized that the cost of hype was too dear. He also reportedly acknowledged that the backlash is being strongly felt outside Krishna and Guntur districts. The sources of enlightenment of downside of the far too much hype is the absence adequate representation from Rayalaseema districts, especially from Anantapuramu at the Disha Nirdesha meeting held at Tirupati. Naidu used to say that Anantapuramu was the district he loves much after East and West Godavari for having sent maximum number of TDP members to the Assembly. In the two-day brainstorming session held at Tirupati last week, Naidu gave a patient audience to the voices from within the party which sensed the damage being done to the image of organization by the highlighting Amaravati excessively. The leaders from Rayalaseema and North Coastal districts, including some cabinet ministers are said to have told their boss that splurging of crores of rupees to create Amaravati brand has created inevitable backlash among the many section of the society.

According to party sources, they raised three points:

A. The ostentatious celebration of foundation stone laying ceremony, instead of creating ‘Andhra Pride’ alienated some regions from the party;

B. An impression that for chief minister Naidu there is nothing beyond Amaravati has gained ground in districts;

C. All development is getting concentrated in the Amaravati area to make it appear world-class city and nothing would come to their districts;

D. The resentment in the Rayalaseema region is the obvious backlash of excessive campaign associated with the foundation stone laying program of Amaravati’

E. Naidu is working like chief minister of CRDA and E. Even before the construction of core capital began, Rajamahendravaram TDP MP Murali Mohan’s real estate venture had got the environmental clearance. Many raised the question that how did Murali Mohan get his land exempted by the CRDA from being taken over under land pooling or land acquisition. When did he buy the land ? This, in their view, had strengthened the accusation that Amaravati hype is being created by the government only to promote real estate interests of some key pro-TDP businessmen.

Naidu, unusually, is said to have taken note of all the points. Convinced of the logic, Naidu has asked all leaders and ministers to be cautious about boasting of Amaravati, world-class capital.

According to a senior TDP leader, who is also a politburo member, Naidu’s plans have gone haywire in the promotion of Amaravati as the world-class capital. ” Naidu’s calculations went wrong. He did Amaravati campaign with a good intention. He thought , the capital talk would create a ‘Andhra Pride’ among the people of three regions in the residuary state of Andhra Pradesh. He expected that everybody would take pride in their capital which is going to be the world’s most modern capital. So, he publicized every event associated with Amaravati as if it was an international affair. Instead of generating an Andhra sentiment, it in fact alienated the people of some regions from the party and the government. Opposition parties are also successful in driving home the point that he is diverting all funds to the capital construction and their districts get nothing,” he said.

In the meeting, it was decided that party and government should refrain from creating hype of Amaravati instead focus on the development aspects being taken all the 13 districts, he said. He would spend more time in the districts tours and reviews about the investment proposals in the districts, he added.