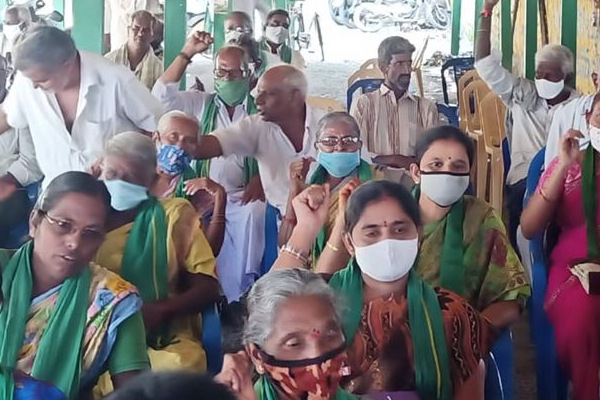 The Padayatra of the Amaravati farmers is increasingly facing problems from the police. The police are slapping cases on the padayatris. The Prakasam police, who slapped a case on November 7 on the farmers and the women who were on a padayatra from Tulluru to Tirupati opposing YS Jagan’s three-capital formula, have filed another case. The police claim that the padayatris were violating the conditions imposed by the High Court.

Prakasam district superintendent of Police issued a press release accusing the padayatris of violating the covid protocol. The statement said that while the court has permitted 157 persons to undertake the yatra, the actual number is more than 2000. It also said that there were over 500 vehicles, which was a violation of the conditions imposed by the High Court. It said that while only hand mikes were permitted, the padayatris were using loud speakers. The SP said that two cases have been slapped.

Meanwhile, the yatra, which took a break for one day on account of Kartika Somavaram fete, began again from Inkollu in Prakasam district. The yatris, who entered Prakasam district on Saturday, walked for 17 km and reached Inkollu on Sunday. On Monday, they performed special poojas on account of Kartika Somavaram. The yatris said that the total number of those performing the yatra was 157, but they can do nothing if the locals join them to express their solidarity.

The yatra is aimed at highlighting the plight of the Amaravati farmers, who had parted with their lands for the construction of the capital city. However, the YSRCP government has announced that there would be three capitals – the administrative capital in Vizag, legislative capital in Amaravti and the judicial capital in Kurnool. The farmers feel that this was a betrayal of the trust and sacrifice of the Amaravati farmers and want the government to rescind its orders. The yatra will go on for 45 days and would culminate at Tirumala.