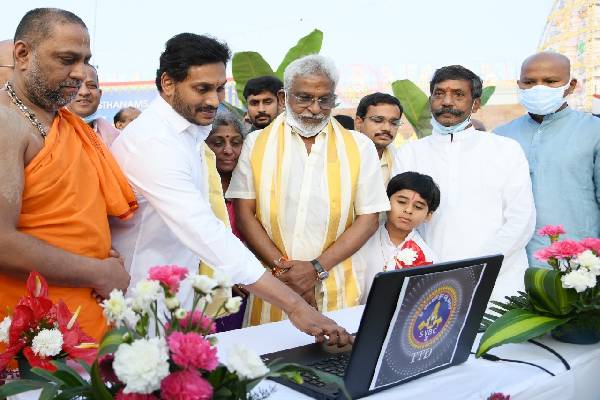 Sri Subudendra Thirtha Swamy of the Sri Raghavendra Swamy Mutt in Mantralalayam, was present on the occasion.

SVBC began services, primarily in Telugu, in 2008. The channel was set up with the intention of promoting Sanatana Dharma among the people. It telecasts happenings and programs connected with the hill-top shrine of Lord Venkateswara at Tirumala.

Earlier in the day, the chief minister offered prayers to presiding deity and participated in Thulabharam ritual at Lord Venkateswara Temple. He also inaugarated new Boondi Making Kitchen Complex in the temple.

The chief minister also witnessed signing of an MoU between TTD and Rytu Sadhikara Samstha at Annamayya Bhavan.

The Chief Minister checked the products made with flowers used in various temples in TTD using Dry Flower technology.

TTD is the world’s richest Hindu temple body and manages several temples and charitable organisations across the world.