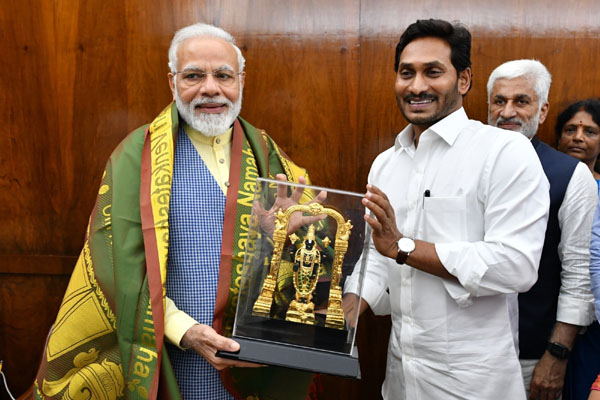 Andhra Pradesh Chief Minister Y. S. Jagan Mohan Reddy on Tuesday met Prime Minister Narendra Modi and reiterated the demand that the Centre accord Special Category Status to the state and fulfill other commitments made in Andhra Pradesh Reorganisation Act.

Jagan Reddy called on Modi in the national capital and discussed various issues related to the state.

According to Chief Minister’s Office, Jagan Reddy explained the problems faced by the state and underlined the need to grant Special Category Status (SCS) to the state for its industrial development and overall growth.

The YSR Congress Party (YSRCP) chief has already announced that during every meeting with the Prime Minister, he will raise the issue of SCS, which was promised by the Centre while bifurcating Andhra Pradesh in 2014.

The Chief Minister also sought incentives for establishment of industries in the state. He demanded exemption from Goods and Services Tax (GST), Income tax and 100 per cent insurance premium for 10 years to industries.

He also urged Modi to fulfill the promises made to the state in Reorganisation Act by establishing steel plant in Kadapa district and constructing Ramayapatnam port as construction of Dugarajupatnam port envisaged earlier was not feasible.

Jagan Reddy, who assumed office on May 27, submitted a petition to Modi regarding different issues. He briefed the PM on the steps taken by his government to improve people’s standard of living, to provide social security to various sections of society, create infrastructure and ensure corruption-free and transparent governance.

Justifying his government’s decision to cancel Power Purchase Agreements (PPAs) entered into by previous Telugu Desam Party (TDP) government with the producers of renewable energy, Jagan Reddy said the previous government was irrational and outlandish in signing these PPAs as they caused huge burden on the state exchequer. He alleged that PPAs were signed only to benefit a select few with ulterior motives.

The Chief Minister said though there was a purchase limit of 5-10 per cent, the TDP government purchased 23.6 per cent of renewable energy, causing Rs 2,654 crore loss to electricity department. He blamed previous government for the power producers landing in Rs 20,000 crore debts.

Explaining the water problems faced by the state, Jagan Reddy sought interlinking of Godavari and Krishna rivers. Stating that the government plans to develop a Water Grid at a cost of Rs 60,000 crore by 2050 to supply safe drinking water to people, he sought the Centre’s cooperation in the project.