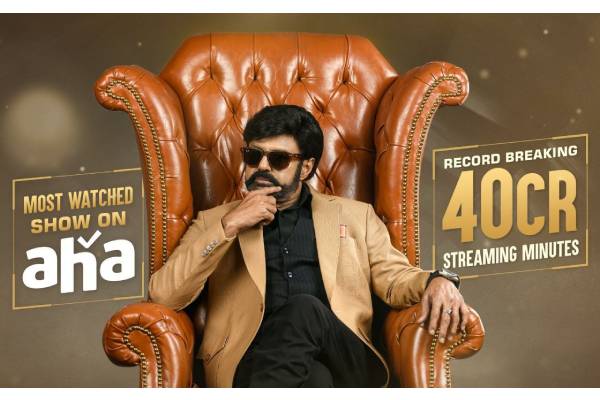 With a whopping score of nearly 40 crore streaming minutes, ‘Unstoppable’ has become the number one talk show of recent times, in Telugu.

Overwhelmed by the kind of response they have been receiving, the producers took to Twitter to make an announcement on the same.

“The love is UNSTOPPABLE ??#UnstoppableWithNBK is now the most-watched show on #ahavideoIN with 40 Crore Streaming Minutes ?? All Episodes Streaming Now”, Aha’s tweet reads.

Tollywood actor Balakrishna who appeared on a talk show for the first time has been receiving many praises for his energy and timely punches. Tollywood bigwigs like Rajamouli, Keeravani, Mahesh Babu, Nani, Ravi Teja, Rana Daggubati, were among the guests who appeared on the show.

The recent and the finale episode of the curtain-raiser season of ‘Unstoppable With NBK’ had Mahesh Babu and his friend and director Vamsi Paidipalli as the guests on Balakrishna’s show.

On the other hand, Balakrishna, who recently appeared in Boyapati Srinu’s hit movie ‘Akhanda’, will next act under Gopichand Mallineni’s direction for their next venture.