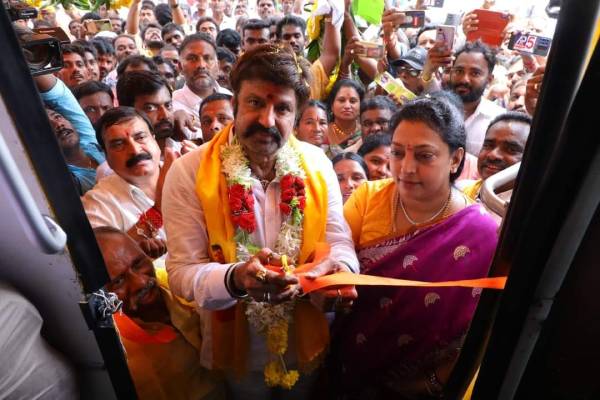 TDP MLA from Hindupur, Nandamuri Balakrishna, launched Arogya Radham, a mobile clinic, in his constituency. He spent over Rs 40 lakh from his own pocket to get the vehicle ready. The vehicle would have first aid treatment and some testing labs.

The vehicle goes around his assembly constituency, providing basic health care to the people, free of cost. He had offered to provide quality treatment to the people as a gesture. Given the poor health infrastructure available in Hindupur, it is for sure the vehicle will fetch him one more victory in the 2024 general elections.

Quite interestingly, his son-in-law and former minister Nara Lokesh, too had started a mobile clinic and two primary health care centres in Mangalagiri Assembly constituency in Guntur district. Though Lokesh had lost the 2019 general elections, he is still there in the constituency meeting people frequently.

The in-laws are busy providing basic health care assistance to the people in their respective constituencies, 15 months ahead of the next elections. Balakrishna had been representing the constituency for the two consecutive terms. He had won for the first time in the 2014 elections and repeated the victory in the 2019 elections.

Hindupur had been the fortress of the NTR family since 1985. Late NTR had won from here for three consecutive elections, followed by his son Nanadamuri Harikrishna in 1996. Later, for three elections, the Nandamuri family did not contest the elections. It was only in 2014, Balakrishna entered here and won the seat.