Switch to: తెలుగు
Home General No immersion of PoP idols in Hussain Sagar this year 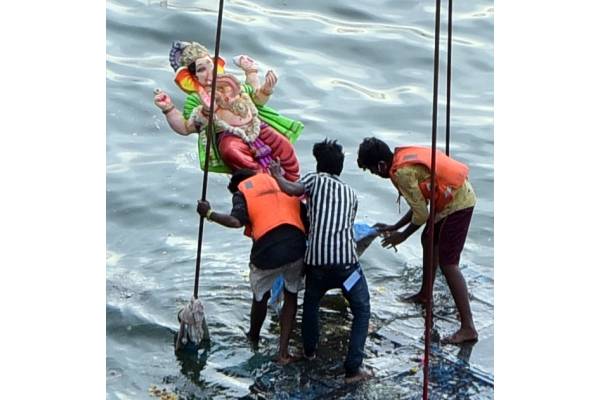 Authorities in Hyderabad this year will allow immersion of Ganesh idols made by Plaster of Paris (PoP) only in baby/artificial ponds and not Hussain Sagar Lake this year.

The Supreme Court had last year allowed immersion of PoP idols for the last time and has asked Telangana authorities to come up with a plan for immersions at an alternate place.

The authorities have built 50 ponds in addition to the 25 already existing for immersion of idols.

Telangana High Court on September 9, 2021 directed the state government not to allow immersion of Ganesh idols made of PoP in Hussain Sagar Lake and other lakes in and around Hyderabad.

On a petition filed by the state government, the High Court refused to modify its order. The state government subsequently filed an appeal in the Supreme Court. The apex court allowed immersion of PoP idols for one last time.

The court directed the government to permit immersion of PoP Ganesh idols in baby ponds constructed by the GHMC or separate areas/ponds which do not result in the spread of pollution into the main water body.

The state government has also taken steps to promote environment-friendly Ganesh idols. It will distribute a total of six lakh idols made of clay this year.

Khairatabad Ganesh committee, which installs tallest idol every year, has agreed to use clay for its idol this year.

As part of the arrangements for the ensuing Ganesh Navaratri festivities beginning on August 31, Hyderabad Police Commissioner C.V. Anand on Wednesday held a coordination meeting with all SHOs and senior officers of city police.

Anand gave a slew of instructions regarding setting up of idols, intimation forms and immersion of PoP s idols and clay idols, the procession routes and precautions.

With some of the SHOs and DCPs being fresh to the city police and doing this ‘bandobast’ for the first time, the CP and his staff officers spent a lot of time explaining the various aspects of the preparatory works for the biggest event in the calendar of Hyderabad City Police.

“Since January, all the festivals of various communities were conducted peacefully despite the huge turnout of crowds post-Covid, and so were so many other programmes and events. Those were all quarter finals and semi finals, Ganesh bandobast is the finals and I am sure u will all rise to the occasion and do equally well,” he told the officials.

The police chief said that the organisers must intimate the concerned SHOs about the setting up of the idol and obtain permission. Instructions were given to immerse PoP idols at baby/artificial ponds. The officials were given clarity about court orders.

There will be coordination meetings with the organisers of these mandapams at every level to decide about the installation so as not to inconvenience the general public. Power, water, barricading etc., will be discussed.

The peace committee members should be actively involved and precautions should be taken for watching social media and mischievous posts, the commissioner said.

The Ganesh festivities will conclude this year with immersion on September 9. Every year, thousands of idols are immersed in Hussain Sagar Lake in the heart of the city and dozens of other water bodies in and around the city.