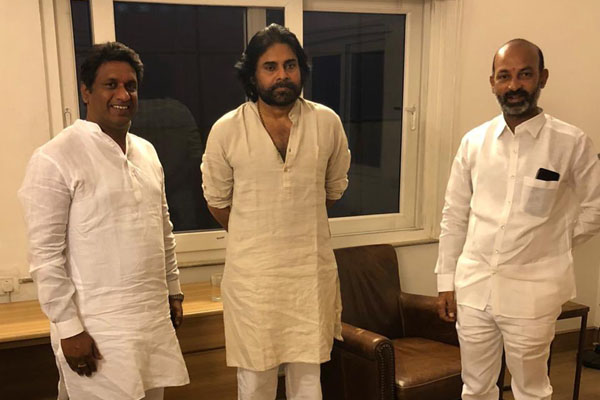 Both leaders held consultations for over an hour at the Jana Sena Party office in Jubilee Hills. In the hush-hush meeting, according to sources, the BJP leader Bandi Sanjay reportedly asked Pawan Kalyan to work with the BJP on important issues.

In the closed-door meeting on Monday, Bandi Sanjay Kumar, it is learnt, had asked the actor-turned-politician to work closely with the BJP. In his Twitter account @bandisanjay_bjp, Bandi Sanjay wrote, “Met Shri @PawanKalyan Garu & had a fruitful discussion on current issues.” According to sources, Bandi Sanjay discussed Pothireddypadu head regulator lift irrigation issue. Talking to mediapersons, Bandi Sanjay said he had discussed the Telangana government’s failure to halt the AP government from taking up capacity enhancement of the Pothireddypadu head regulator lift irrigation project, the TTD attempt to sell the temple assets in Tamil Nadu and the corona pandemic situation in the state among others. He said both the AP CM and Telangana CM were playing games on sharing river water. He also said the BJP will spearhead public agitation against the TTD’s move to auction the temple assets in Tamil Nadu. “The Andhra Pradesh government should immediately withdraw its plan to sell temple assets,” he said talking to mediapersons on Monday.

The BJP has upped its ante against the TRS after Bandi Sanjay took over as the party president in Telangana. He hit out at the ruling TRS on the issue of testing. He had accused the state government of misleading the Central team which had visited Telangana to take stock of the measures to contain COVID-19 in the state. Sanjay Kumar came down heavily on the TRS government stating that it had failed to chalk out and implement any concrete plan to tackle the problem faced by the state farmers and the issue of migrant workers.

In Andhra Pradesh, the BJP and Jana Sena Party already announced alliance for the civic body elections which were postponed due to the corona virus outbreak. Pawan Kalyan has been quite vocal in attacking the YSRCP dispensation on several issues including the controversial decision to introduce English as compulsory medium of education in government schools, illegal sand mining and the idea of three Capitals. On Monday, Pawan Kalyan took to his Twitter handle to strongly condemn the TTD’s move to sell around 50 temple assets in Tamil Nadu. “Andhra Pradesh has suffered and is still suffering a lot post bifurcation; the state still does not have a full fledged capital city; the economy of the state is very weak and fragile. AP needs investors to create jobs and revive the economy; one of the major resources for any government is land. Land can attract investors, land can be used to create value, land can generate revenue and hence the government must try all possible ways to protect and secure government properties, especially land. Hurting the devotee’s sentiment and belief and risking the economic opportunities for the state in the future, it would be a grave mistake if the YCP led state government lets TTD sell off the lands in the prevailing circumstances,” Pawan Kalyan tweeted.

“Devotees have donated house sites, agricultural lands and buildings. The TTD has insulted the devotees by calling these assets as non-remunerative. The devotees donated the properties for Hindu religious purposes and to ensure service to the Lord, and not to the State government to sell the assets. The properties donated by the devotees should serve the devotees and pilgrims coming to the Lord’s abode,” Pawan Kalyan noted in his tweet.