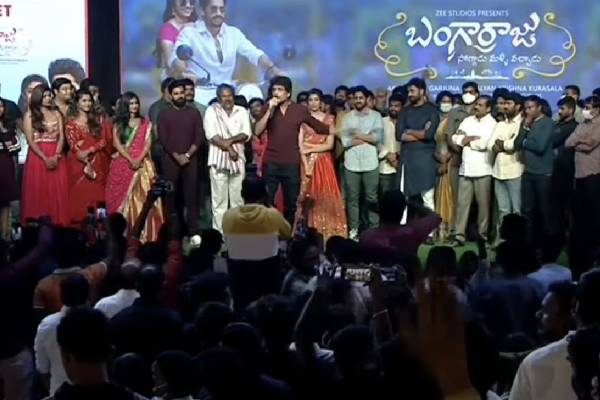 Nagarjuna and Naga Chaitanya starter Bangarraju released during the Sankranthi season and the film reported massive numbers all over during the holiday weekend. A grand success meet of the film took place last night in Rajahmundry and AP Minister Kurasala Kanna Babu along with Rajahmundry MP Margani Bharat attended the event as Special guests. After the night restrictions and 50 percent occupancy are pushed away from the season, Nagarjuna heaped praises on AP Chief Minister YS Jaganmohan Reddy.

During his speech, Nagarjuna said “I spoke to my close friend Megastar Chiranjeevi who met YS Jagan recently. He said that the good days for the film industry are ahead. Thank you YS Jagan garu” told Nagarjuna. He also thanked his fans for making Bangarraju a blockbuster. There is criticism that the night curfews and 50 percent occupancy rule are postponed for the benefit of Bangarraju as Nag shares a close bonding with YS Jagan. The veteran actor strategically heaped praises on YS Jagan and thanked him during several recent events and made statements that the ticket pricing GO is not a barrier for his film Bangarraju.