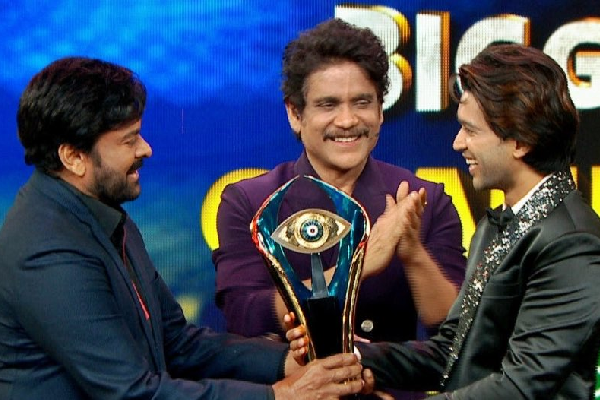 Bigg Boss Season 4 Telugu finally came to an end today. Abhijeeth, Akhil, Harika, Ariyana and Sohail finally reached the grand finale of the season. The finale was convened on a grand scale with several celebrities like Anil Ravipudi, heroines Praneetha, Lakshmi Roy and Mehreen joining the show. There was also a musical show by the music director Taman that entertained the audience.

Harika is the first one to be eliminated:

Director Anil Ravipudi and heroine Mehreen joined the show in this grand finale. The first contestant to eliminate was Harika and Mehreen held her hand and walked her into a crane. Meanwhile, Anil Ravipudi told, his daughter is a big fan of Harika.

Ariyana is the next:

Then Nagarjuna gave an offer to the remaining 4. Heroine Praneetha joined the house with briefcase with an amount of 10 lakhs and if any of them want, they can go out of the house with that amount. But none of them took the money. Then, heroine Lakshmi Roy walked Ariyana out the house.

When Sohail, Akhil, and Abhijit were still in the house, Nagarjuna gave them an opportunity to them. There was a gold color briefcase with three handles which has 25 lakhs amount in it. The offer was that if anyone wants to take the money, they can take it and leave the house. While Akhil and Abhijit and didn’t take the chance and waited for the trophy, Sohail utilized the opportunity and took the amount. Sohail’s family members also approved his decision. He initially told that he will give 5 lakhs to an orphanage and 5 lakhs to his Mehboob. But Mehboob told that he will also donate that 5 lakhs to the orphanage. Finally, Nagarjuna pitched in and told, he will take care of the donation and Sohail and Mehboob can take all that money home.

The final battle was between the arch rivals of the season – Abhijeeth and Akhil. Nagarjuna walked both of them on to the stage. Then Megastar Chiranjeevi joined the show. As usual, Nagarjuna and Chiranjeevi shared nice camaraderie on the stage.

Finally Nagarjuna announced that Abhijeeth is the winner of the season. Both Akhil and Abhijeeth spoke well after the award of trophee. Abhijeeth’s mother requested Chiranjeevi and Nagarjuna to bless both Abhijeeth and Akhil equally.

With this the season 4 Telugu came to an end.