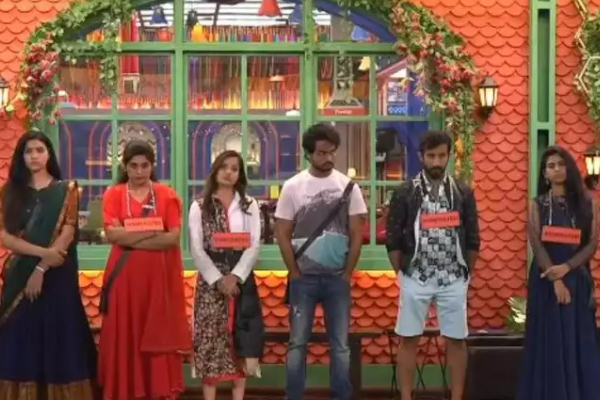 Bigg Boss made three housemates – Sunny, Sriram and Jessie as hunters. Rest of the housemates photos are pasted on the toys that resemble monkeys. These toys are hung on a special tree. As soon as the buzzer is on, the housemates have to run and grab the bananas that are placed inside the house. The two housemates who grabs the banana will get a chance to nominate. Then when the buzzer is on three hunters should run and whoever reaches the safe tree first, will get the chance to listen to the housemates who grabbed banana and decide on their nominations. Then he has to take out the monkey toy pasted with their photo and throw it in bin.

When the buzzer was given Shanmukh and Siri grabbed bananas and got the chance to nominate. Sunny was the first hunter to come out when the buzzer is given and he will get a chance to decide. But Shanmukh and Siri both took the name of Anne master. So Sunny nominated her. Anne told that – after seeing Siri’s journey and get mother’s video, she was touched and so she can never say Siri is worst performer. Kajal objected to this and told her journey is no less than Siri journey. Anne later nominated Siri. Siri nominated Manas. But Sunny decided to leave Manas and nominate Siri.

Next time, out of the housemates, Kajal and Siri grabbed the bananas. Out of the hunters, Sunny ran out first. So he got chance to decide. Kajal nominated Priya and Siri nominated Manas again. But Sunny decided to nominate Priya.

Next time, Priya and Siri grabbed the bananas but Siri passed her chance to Priyanka. However, this time also , out of the three hunters, Sunny reached first. Priyanka nominated Kajal for her provoking nature. Priya intentionally gave a silly reason that Ravi is drying his towel on sofa and gave his name. Everyone including Priya expected Sunny to take Priyanka nomination but he nominated Ravi. Priya did this intentionally to expose Sunny’s double standards.

Next time Siri and Ravi grabbed the bananas but Siri passed it again to Priyanka. This time Priyanka and Ravi both nominated Kajal , and so Sunny had no choice but to nominate her.

There was another catch. Out of the 3 hunters, only one , whoever wins the race most of the times, will be safe. As per this rule Sriram and Jessie got nominated. Moreover, Lobo, who is in secret room, was earlier directly nominated by the host.