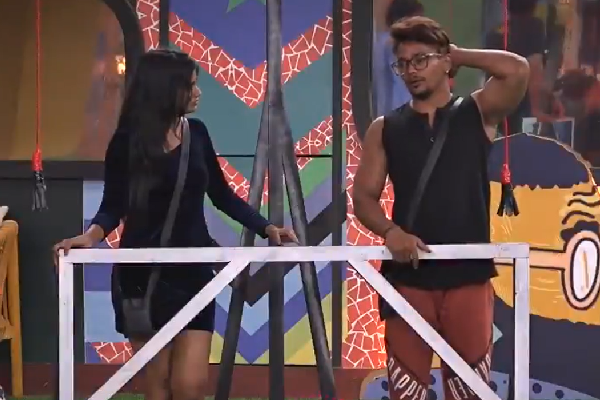 Bigg boss Telugu makers seem to be carried away with the recent ratings of the channel. The audience, whoever watched the show this Monday felt Bigg boss wants to take the steering into his hands and manipulate the nominations the way he wanted.

Out of these two, Monal got nominated and Akhil got saved. As these two are not playing the individual game but playing a combined game, this week nominations may not do more harm to Monal despite there is a lot of anti on Monal. That is because, as Akhil is not in nominations, his fans may vote for Monal. It seems Bigg boss makers want to save her week after, for the reasons best known only to them. despite her irritating behavior. There were many reports that it was Monal who was supposed to leave last week but the Bigg boss team made Kumar Sai a scapegoat to save Monal. Already people are getting many doubts about someone in Bigg boss editors team/ managerial team are helping her.

Again these 2 are stronger candidates. Harika cried that it is totally unfair to have one of them in nominations. Abhijit nominated himself and saved Harika, unlike the other pair where Akhil saved himself and nominated Monal.

After a lot of deliberations, Avinash nominated himself and saved Sohail.

These are not on good terms in the house, there is no enmity but at the same time there is no friendship between them. Lasya asked Divi to give her a break from the nominations as she has been in the nominations continuously for which Divi agreed. This may prove disastrous for Divi as she is not getting a very huge number of votes.

Mehaboob and Ariyana argued for so long. The way Mehaboob spoke sometimes earned sympathy for Ariyana. But Mehaboob was adamant and finally, Ariyana nominated herself.

Even though he is the captain of the house, he is into nominations because of the previous task, He seems to believe that unless we come into nominations, our vote base will not be built, which is true. But as he is also not getting the top votings like Abhijit or Akhil or Harika, he is also in the danger zone. If he gets evicted, he will create history as the person evicted despite being the captain.

Overall, Monal, Divi, Ariyana, Noel, Abhijit, and Avinash are in the nominations this week.