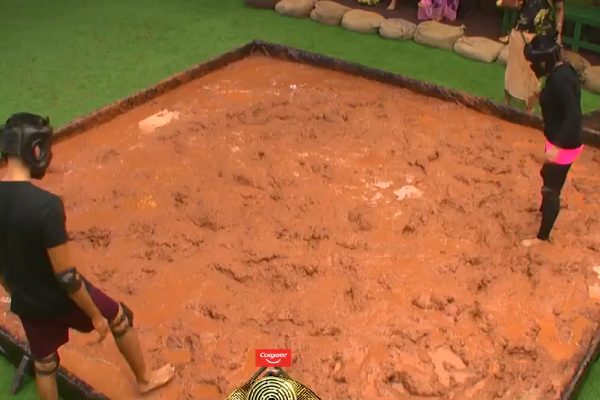 It is known news that Bigg boss house already divided into two teams headed by Ravi and sunny. As per this task, one contender from each team should come and do wrestling fight in the mud pit. Manas came forward from Sunny team while Vishwa joined from Ravi team. Manas was able to defeat body builder Vishwa. Next, Swetha came from Ravi team and Priyanka from Sunny team but this time Swetha from Ravi team won. Finally Jessie and Anne fought and Jessie won. As he is from Sunny team, overall, Sunny won in this task.

Photos on the wall:

This is the second task. In this task, contenders have to fix the photos of their favourite Princess either Ravi or Sunny on the given walls. Whoever gets Maximum number of photos will be the winner. Sriram and Vishwa are contenders from Ravi team while Jessie and Manas played from Sunny team. This task was a bit violent and physical. The task of Vishwa vs Manas was almost a physical fight. Sriram and Jessie too had a lot of manhandling during the task. Sunny team won this task too.

This is one task that is played in almost all seasons of Bigg boss. Sunny team won in this task too.

Overall, Sunny’s team has upperhand over Ravi’s team as of now.