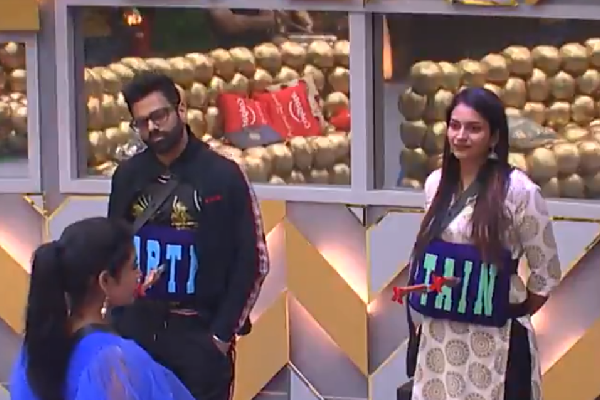 Bigg boss Captaincy task continued today as well. It started couple of episodes ago with the weight loss contest. Housemates were deprived of food and were given the task to reduce their weight.

In today’s episode, Swetha and Annie master pair selected Siri and Shanmukh pair as their opponents. Swetha and Anne won in the task and became contenders for the Captaincy task. Siri was seen disappointed for letting Shanmukh down.

After all the tasks are over, Bigg boss asked Kajal to name the top 3 pairs who lost more weight. Manas surprised the housemates as well as the viewers by losing 6 kgs in 2 days. Kajal announced Manas-Sunny, Swetha-Anne, Sriram- Hamida are the top 3 pairs. Later Bigg boss asked the each winning pair to select one out them who will contend for the captaincy task. Swetha and Anne tossed a pillow and Swetha won the toss. So Anne master gave the chance to Swetha. Hamida easily agreed to let Sriram contend. Manas and Sunny could not easily decide between them. But finally Manas gave chance to Sriram. With this, Swetha, Sunny and Sriram became the contenders for Captaincy task.

Vishwa, Shanmukh, Siri stabbed Sunny and they told they did not connect with Sunny. Sunny disappointed with the reasons given by Siri and argued with her. He got emotional after listening to their opinions. Ravi, Priya and Nataraj too stabbed Sunny. Ravi commented that Sunny has no capability to command the housemates. Sunny was seen defending it. As it looked like Sunny was targeted by most of the housemates, it may fetch more sympathy votes for Sunny. As per unofficial reports, already he is in the top this week as per votes.

Sriram is the captain:

As per the votes, Sriram became the captain of the house. But Sunny was seen highly disappointed with the decision of Kajal. Priyanka was seen supporting Manas.

Overall it was an interesting episode.