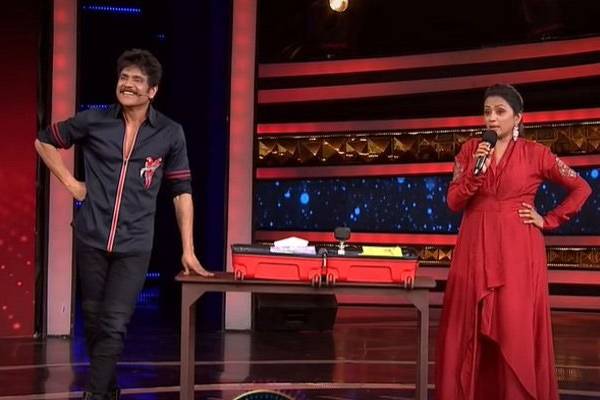 Today is the Sunday episode. In Bigg boss’s house, it is a fun day episode. Today Bigg boss invited anchor Suma to join the show and entertain. Bigg boss show is not able to provide entertainment in the required dosage to the audience in recent times. But the episodes in which Bigg boss makers invited outside entertainers like hyper Adi in the past and Suma today are very much successful.

Anchor Suma is known for her spontaneity and sense of humor. But today she exhibited her exemplary skill in imitating others. She imitated almost all the housemates and their body language. She also passed some very satirical comments on the housemates that evoked laughs. Her imitation of Sohail’s body language and his way of talking was so good. The way she imitated Ariyana also brought down the house.

After saving all the other contestants, Nagarjuna told both Avinash and Rajshekhar to go into the confession room to know who out of those two will leave the house. At that time he became so nervous. It seems he is under tremendous financial pressure. He revealed earlier that he was on the verge of suicide during lock-down due to these financial issues. As Ariyana knows these things she was seen requesting Avinash not to take any hasty decision like suicide in case he is evicted. The way she requested Avinash moved the audience. But after some time, Nagarjuna told the house that both are evicted as this week is for the double-elimination. This shocked the housemates. But finally, it turned out to be a prank and Amma left the house.

Amma Rajasekhar was supposed to leave the house last week itself but Bigg boss allowed him to continue in the house. He was also made a contender for the captaincy task. He won the captaincy also. But the way he behaved after becoming the captain irritated not only the housemates but also the audience to some extent. Out of the nominated contestants, he is definitely the weakest contestant. After Surya Kiran, Karate Kalyani, and Sujatha, this is the week when audience pulse and Bigg boss decision are in sync.