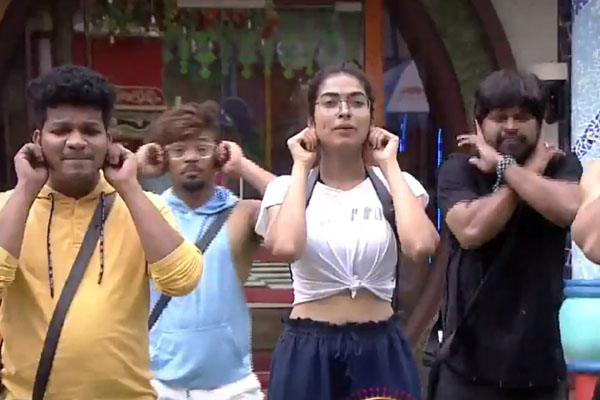 Bigg boss season 4 is going on with good ratings as of now. Today there were a couple of skits, some punishments, and some drama in the house.

Even though there were lots of dances and songs, there was not much comedy. But the entry of Jabardasth Avinash changed the mood of the house completely. He brought all the housemates into a comic mood with his funny talks. Devi, who is usually seen in a serious mood also did some pranks on Avinash. Today there were two comedy skits. The first one was Gandaragolam skit by Kumar Sai, Amma, Divi, Devi, and Harika. The second one was ‘Cinema shooting skit’ by Kalyani, Monal, Akhil, Avinash, and Sujatha. Both the skits were average. But Noel and Lasya who were supposed to be judges and decide the winner based on their judgment took the decision based on the feedback of Gangavva.

Amma Rajasekhar was seen offended by the judgment and openly criticized the judges. Lasya and Noel also were seen discussing whether their decision was hasty. Bigg boss indicated that both of them were winners by sending gifts to both the teams

The house of Bigg boss has some rules. One of them is to speak in Telugu always. The contestants like Monal who don’t know Telugu as well as some contestants like Abhijeeth, Harika, and Noel etc were seen speaking in English most of the time. Also the housemates are seen moving lazily when Bigg boss called them. Considering all these, Bigg boss gave some funny punishments to all the housemates like doing situps, writing impositions etc.

Noel is the new captain:

Bigg Boss asked the housemates to select 4 housemates to compete for the captaincy based on who entertained the most in luxury budget tasks. Abhijeeth, Noel, Kalyani, and Mehaboob were selected by the housemates. When Bigg boss asked these 4 to justify themselves about their candidature, Abhijeeth and Mehaboob did not seriously justify themselves. Kalyani showed her keenness to become captain and Noel expressed a balanced view without either showing keenness or denying his candidature. Housemates unanimously selected Noel as captain from these 4 competing contestants.

While in the house it is very common for someone or the other to get offended by the other housemates. Monal offended by Avinash repeatedly taking her name to generate some comedy. Devi also felt she was sidelined by the housemates ever since the day of nominations.

Overall this was an engaging episode.