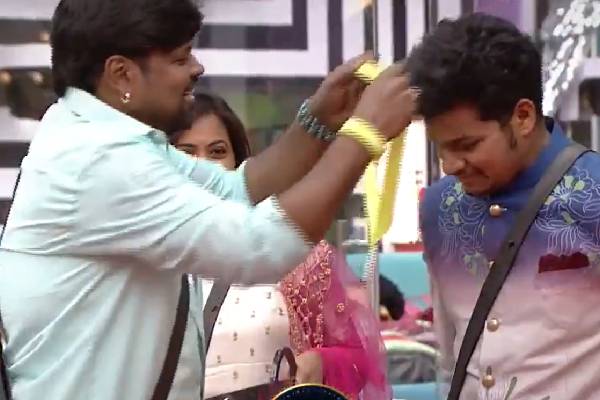 Nagarjuna is really proving that he is the king of hosting on Telugu TV. The ease with which he is hosting the show in recent times. Today’s episode is another example of his exemplary hosting skills. Today he played the truth tower game with the housemates.

This is like the most popular game of Jenga. After a contestant taking out one stick, they will be asked a question by Nagarjuna, for which they need to reveal the truth. Harika was asked a question that whom does she think is not at all a competitor for her. For this, she answered Kumar Sai. Later Nagarjuna asked her about the ongoing rumors of the relation between Harika and Abhijit. Later Devi Nagavalli also targeted Kumar Sai and told, given a chance, she will swap him any of the nominated contestants. Mehboob also targetted Kumar Sai and told, he is not fit for the game.

Kumar Sai vs Abhijit vs Akhil:

Kumar Sai answered that Abhiit is the fakest person in the house. He also attacked Abhijit’s character by disclosing that he has a loose tongue. He also cleverly dragged Akhil, who is in loggerheads with Abhijit from the beginning, into the conversation. This later turned into a verbal war between Abhijit and Akhil.

Nagarjuna asked the house to select one ‘Maha Nayakudu’, ‘Maha Kantri’, and ‘Mahanati’ in the house. Abhijit was selected as Mahanayakudu by Nagarjuna. House unanimously selected Avinash as Maha Kantri for cheating Rajasekhar during the task. Nagarjuna showed the video of Gangavva during the task that surprised the housemates and the house unanimously gave her the title of Mahanati. The video of Gangavva shown for this was hilarious and evoked laughs in the house.

Later, Nagarjuna asked the housemates to tell one person and tell negative quality about them. Monal told Akhil has anger issues. Noel told Amma Rajasekhar is telling a lot of dirty jokes nowadays. Divi told Abhijit is acting like an innocent person. Avinash generated comedy while talking about Lasya. Amma also did the same with Divi. Lasya spoke negatively about Swathi

As of today, Lasya and Monal got saved from nominations. We need to wait and see who will leave tomorrow. As per the reports, it is Mehboob but we need to see if Bigg boss gives a twist, especially given the fact that the vote difference between Mehboob and Devi is less than 1%.