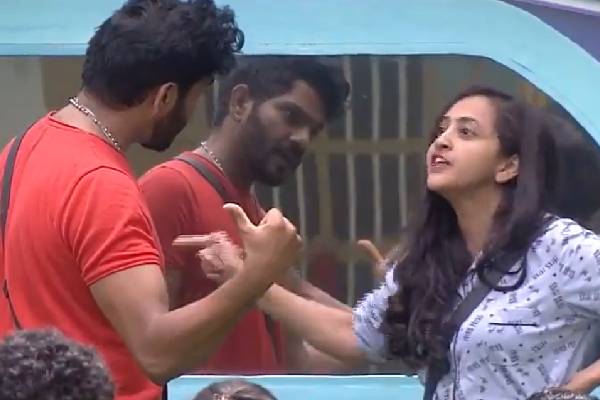 Monday is the day of nominations in Bigg boss house. After emotional episode in which Devi nagavalli left the house in the third week of Bigg boss season 4, now the stage is set to eliminate one more person from house this weekend. Bigg boss gave and interesting game for the nominations this week.

As per this task Akhil and Sohail are hit men who take killing contracts from the contestants. They will be waiting in the lounge. Rest of all the housemates will be waiting in the living room. As soon as buzzer is on, housemates have to run into the lounge. Whoever reaches first gets the chance to give a killing contract. They have to explain the reasons for the contract and give the money to hit men. One of the hit men will go and kill that particular contestant after explaining the reasons given by the person who gave them contract. The person who gets killed will be nominated. Out of Akhil and Sohail whoever captures the gun first will get the chance to kill and also the money offered. At the end , out of Akhil and Sohail whoever has more money will get saved and the other will be nominated.

When the first round is on, Amma Rajasekhar is the first one to reach the killers. He nominated Swati Dixit who is the new entry into the house. He cited the reason that the rest of all the housemates have become friends with him but Swati is not still very friendly with him.

In the next around it is Mehboob who reached killers first. He nominated Abhijeet citing the reason that Abhijeet called them street boys during the task. It seems the housemates are still in the hangover of the humans vs robots task.

In the third round Ariyana reached the lounge first. She nominated Lasya. It seems Lasya told her that some housemates are getting irritated by the behaviour of Ariyana. So she wanted to get the names of those who got irritated from Lasya.

In the fourth round Harika reached first. She nominated Mehboob again this week. It is known news that mehboob took decision of eliminating Harika in one of the weekends but that turned out to be fake elimination. It seems she is still carrying that negative impression on him. Last week also she is nominated the same Mehboob. However she gave the reasons related to the humans vs robots task.

In the last round, Noel reached first and Sujata reached next. But Kumar Sai objected to this by saying Noel has violated a rule that he has to be in the living room before the buzzer rings. Noel denied saying there is no such rule but Kumar was able to prove that such rule exists by showing rule book. He ensured that Sujatha is given a chance instead of Noel. But the irony is Sujata nominated Kumar Sai who got her the chance to nominate someone.

Out of Akhil and Sohail , at the end of the game, Akhil had more money and so Sohail got nominated.