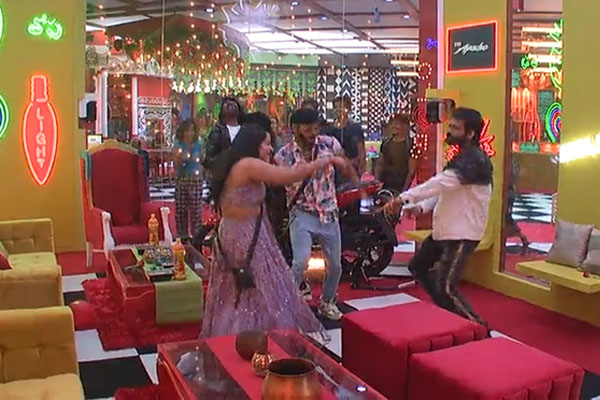 Gangavva becomes captain of the house:

Noel who was in Jail earlier got released in today’s episode. Gangavva was seen involving in active conversations with the housemates today. She was seen imitating the housemates from the humans team who got frustrated during the task. After the humans vs robots task Gangavva, Abhijit, Harika, and Avinash were named as the best performers and the contenders for the captaincy task. Bigg boss gave each of them a bowl of color water and whoever saves their water will become captaincy. Gangavva got support from most of the housemates and so became the captain of the house.

As reported earlier, Swathi Deekshit entered as wild card entry into the house. Her entry was planned grandly by the makers. She joined the house with a face mask while all the housemates are dancing. There was curiosity among the housemates about who she is. After maintaining suspense for some time, she introduced herself to the housemates.

Then Bigg boss announced a task for all the men in the house to impress her and get a surprise gift. All the men competed to impress her. Abhijit, Akhil, and Noel sang for her. Avinash and Amma Rajasekhar made her laugh with funny words. Mehboob did 100 pushups for her. However, she finally expressed her decision that Amma, Noel, Akhil, and Avinash impressed her. In fact, she didn’t name Avinash’s name but he himself went ahead and took it granted that she was impressed by him. The surprise gift was the party lounge for these men along with her. The rest of the housemates cant enter the party lounge. These 4 men enjoyed the party dancing with her.

While the four men were partying with Swathi Deekshit, Sohail and Mehaboob were seen having deep conversations about not having ‘pair’ for themselves. They were seen saying ‘without a pairing girlfriend, despite the efforts and performances in the tasks, they will be in danger zone in the house.

Overall this was an entertaining episode with fun, celebration and entertainment. This was a perfect follow up episode after the three episodes filled with the intense task of humans vs robots. task.