Bimbisara has ended its first week with a worldwide distributor share of 25.50 Cr. This is the first film of Kalyan Ram to collect 25 Cr share. The film is a Super Hit at the box office though the blockbuster status depends on how it fares in the Second Week. The film dropped on Wednesday as expected and it has come down to less than 1cr share on Thursday. The film might hit the 30 cr mark worldwide in the full run. 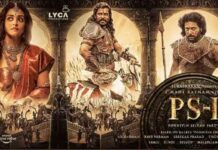