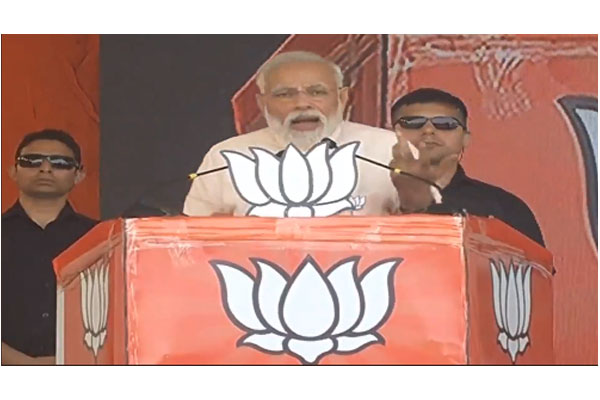 The Prime Minister has asked Andhraites to go through newspapers three years ago and notice what’s Naidu is criticizing about the BJP-led NDA government.

“That’s why we call Chandrababu Naidu as U-turn Babu. Naidu was praising the NDA government earlier and now started criticizing for no fault of the BJP. This is just for political gain only. The Centre has so far released over Rs7,000 crore funds for Polavaram. What’s been the progress so far? TDP and previous government didn’t do anything for Polavaram project for over four decades. The NDA government has only released Rs7,000 crore funds. However, they’re not utilized properly. The U-turn Babu is using Polavaram project as ATM machine to draw funds from the Centre. Andhraites should realise about what’s happening,” said Modi.

Addressing at a public meeting in Rajahmahendravaram on Monday afternoon, Modi further criticized Naidu and his party for posing question over surgical strikes, while ignoring Pulvama attack by militants.

“Such statements can only appease Pakistan. This is showing the innerside of Naidu. Andhra Pradesh people prefer to maintain their own heritage and culture. BJP is committed to protect Andhra heritage and culture, while Naidu prefers his own Heritage company,” remarked Modi.