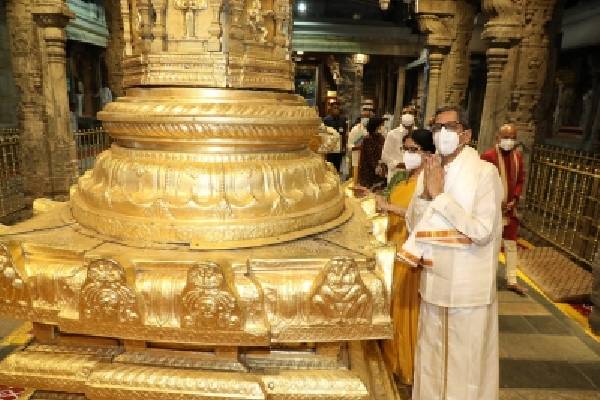 Chief Justice of India (CJI) NV Ramana visited the Tirupati temple in Andhra Pradesh on Friday morning along with his wife and worshipped the deity.

This is his first visit to the temple after being sworn in as the Chief Justice on April 24 this year.

As per tradition, the CJI was escorted into the temple amid chants by the vedic priests.

Later, the CJI received the ‘prasadam’ (consecrated food) with blessings from the priests at Ranganayakula Mandapam.

The CJI told Sri Venkateswara Bhakti Channel (SVBC) that there have been many miracles in his life and Lord Venkateswara’s blessings have led him to the highest judicial office in the country. The CJI said with the Lord’s blessings, he will work to keep the Indian judiciary’s flag flying high.

On his arrival in Tirupati on Thursday night, the CJI was accorded a warm welcome by Reddy and other senior TTD officials.

Late on Thursday night, the CJI and his wife paid a visit to the temple and prayed at the ‘dwajasthambam’.