Telugu Desam Party Official Spokesperson K. Pattabhi Ram has flayed the YCP Government for throwing rules and regulations to winds with regard to renewals of cancelled lease and new allocations for the Saraswati Power Industries in the last one year of its misrule. In a very brazen manner, the Government gave higher allocation of water and also extended the previous five-year allocation for a lifetime.

The TDP leader reiterated that it was a fact that Chief Minister YS Jaganmohan Reddy along with his wife Bharathi was a partner in Saraswati Power. The same has been mentioned in the election affidavit submitted by the CM. The ruling party leaders and the Government cannot question the contents of the CM’s own affidavit at this stage. Saraswati Power was allotted limestone mines in Guntur district and senior IAS officer Sri Lakshmi made these allotments in her capacity as the officer concerned at that time. But the lease was later cancelled as the company failed to start the works as per the scheduled time-frame.

Mr. Pattabhi said that the Jagan Reddy family once again began efforts for getting renewal for Saraswati Power from the Pollution Control Board. In this process, they have misled even the PCB. Several documents and GOs were being shown as proof. For getting the renewal, the GOs were changed at their whims and fancies. The ruling party should explain to the people about the violations that were committed in regard to the CM family’s Saraswati Power. 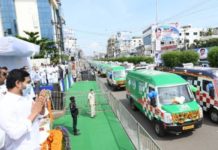