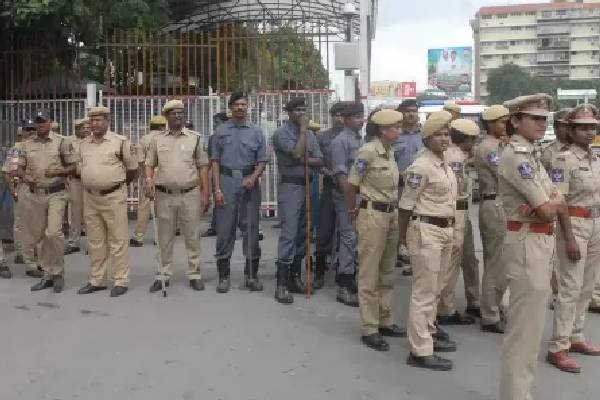 The Telangana police have foiled the “Chalo Pragathi Bhavan’ protest march of the Telangana BJP, ABVP and BJYM by placing several BJP leaders under house arrest.

Some leaders were even taken into preventive custody after the party announced marching to the Pragathi Bhavan, Chief Minsiter K Chandrasekhar Rao ‘s official residence, to protest the high-handedness of the police.

Early in the morning, police personnel were deployed outside the residences of many BJP leaders to prevent them from moving outside. As a preventive step, the BJP leaders including BJP vice-president D K Aruna, MLC Ramachandra Rao, MLA Raja Singh and senior leader Motkupalli Narasimhulu were put under house arrest and some of them were also taken into preventive custody in Hyderabad and some other places of Telangana.

Police personnel were deployed at the residence of Aruna to prevent her from leaving the residence. She told the police officials that she has to leave for Dubbaka to campaign for the November 3 by-election to the Assembly seat.

Ramachandra Rao termed the house arrest as murder of democracy. He said that the BJP leaders have the freedom to meet the chief electoral officer and the governor to complain about the incidents in Siddipet.

The BJP leaders and its youth outfits gave ‘Chalo Pragathi Bhavan’ call in protest against thr arrest of State BJP president Bandi Sanjay Kumar and searches at the residences of Dubbaka BJP candidate Raghunandan Rao’s kin in Siddipet without search warrant or without following due diligence.

The BJP leaders decried the police action against Raghunandan Rao stating that the TRS government has targeted him ever since the party had announced his name as BJP candidate for Dubbaka bypoll.

The state BJP leaders said they will complain to the state election commissioner over the alleged harassment by the TRS government against the BJP leaded ahead of bypolls in Dubbaka.

On Monday, Kishan Reddy said he will take up the issue of police high-handedness to the notice of Election Commission and Union government and party central leadership.

He said Union Home Minister Amit Shah had telephoned him to enquire about the arrest of BJP leaders and searches at the residence of Raghunandan’s kin.

He termed the arrest of state BJP lesders, including party president Bandi Sanjay as highly objectionable and that he would take it up with the central Election Commission and election code violation of the TRS government.

He said the TRS party is frustrated at the growing strength and popularity of the BJP in the state. He accused the ruling TRS of misusing the police force to create fear among the BJP ahead of the election campaign for Dubbaka bypoll.

Further, Kishan Reddy said he will personally take part in the poll campaign in Dubbaka. Earlier, Kishan Reddy, who rushed to Siddipet on Monday evening, extended the party’s support to the family of Raghunandan Rao.

Telangana BJP president Bandi Sanjay, former Member of Parliament from Peddapalli, and BJP leader, G. Vivek Venkataswamy, also known as G. Vivekanand and a host of other leaders were arrested in Siddipet.

The police and the BJP leaders clashed in Siddipet when the police personnel tried to stop Bandi Sanjay who received minor injuries.

The seizure of money from the kin of BJP leader assumed significance ahead of the Dubbaka by-election which is slated for November 3.

The bypoll for Dubbaka Assembly constituency was necessitated after sitting TRS MLA Solipeta Ramalinga Reddy’s death due to heart attack.

While TRS has decided to field Reddy’s wife Solipeta Sujatha as its nominee in the bypoll, BJP is fielding Raghunandan Rao who lost twice. Cheruku Srinivas Reddy, son of former minister Cheruku Mutyam Reddy, is the Congress candidate for the bypoll.