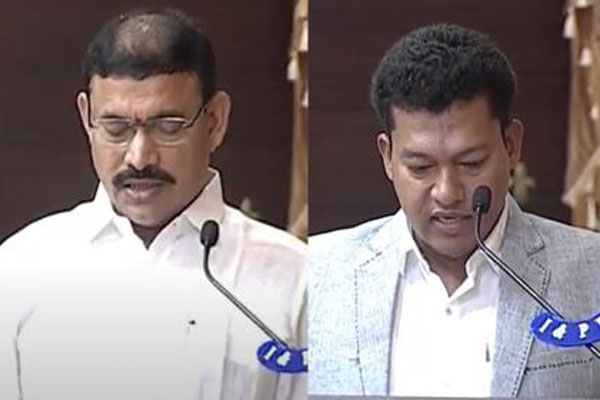 Ramachandrapuram Assembly Constituency MLA Chelluboyina Srinivasa Venugopala Krishna and Palasa MLA Seediri Appalaraju have been inducted in the Cabinet rejig. Both the ministers took oath of office at Raj Bhavan.

Chelluboyina Srinivasa Venugopala Krishna, a faithful lieutenant of Jagan Mohan Reddy and a follower of late CM Y S Rajasekhara Reddy, had served as Zilla Parishad chairman in East Godavari. He belongs to Settibalija community. Palasa MLA Seediri Appalaraju belongs to the fishing community. He is a first time MLA. He could be offered fisheries portfolio in place of Mopidevi.

Further, the Chief Minister also promoted Minister for Roads and Buildings Dharmana Krishna Das as Deputy Chief Minister. Jagan preferred Krishndas over his brother Dharmana Prasada Rao. Krishndas, a staunch Jagan loyalist, stood behind the YSRCP president during his Vodarpu Yatra in 2010. He from Narasannapeta byepolls in 2012 on YSRCP ticket, but was trounced in 2014 elections. He fought back in 2019 elections from Narasannapeta seat.

Dharmana Krishna Das will replace Pilli Subhash Chandra Bose who served Jagan Cabinet as Deputy CM and revenue minister. In a first of its kind of experiment in the country, Jagan Mohan Reddy had appointed five deputies in 2019 after forming the government. The Deputy CMs in the Jagan Cabinet include Pamula Pushpa Sreevani, Alla Kali Krishna Srinivas, Narayana Swamy and Amzath Basha.