The opposition Telugu Desam Party in Andhra Pradesh got a double shock on Tuesday with two MLA set to quit the party.

Sambashiva Rao and Anagani Satya Prasad would not immediately join the ruling YSR Congress to avoid disqualification but is seeking a safe way out like another TDP legislator Vallabhaneni Vamsi who got recognised as an ‘unattached’ member in the Assembly. The TDP has accused the Chief Minister of employing arm-twisting tactics to force its legislators to defect to YSRCP.

Sambashiva Rao and Satya Prasad are two MLAs from TDP who are on Jagan’s target, according to sources. The two MLAs are under severe pressure from the YSRCP leadership to join the ruling party.

On paper, the TDPs strength in the Assembly would still remain 23 in the 173-member House but practically it would be now two short of that number. If the two MLAs join the YSRCP, there is every possibilty that the TDP could lose its Opposition status in the Assembly. Vallabhenini Vamsi managed to get recognised as an unattached member with a separate seat allotment in the House. Chief Minister Jagan Mohan Reddy had set a condition that any legislator seeking to defect to the YSRCP should first resign from their elected post. When Vallabhaneni Vamsi, representing Gannavaram in Krishna district, met Jagan Mohan Reddy and expressed his intent to join the YSRCP, the TDP had expelled him. Speaker Tammineni Sitaram allowed Vallabhenini Vamsi to continue as a member of the House, unattached to the TDP, since he hasn’t technically ‘defected’. It did not admit Vallabhenini Vamsi into the party but its just a formality.
It remains to be seen if the two MLAs will join the YSRCP. If that happens, the TDP’s Opposition status will hang in balance. 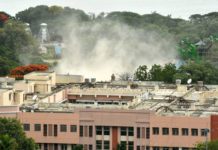