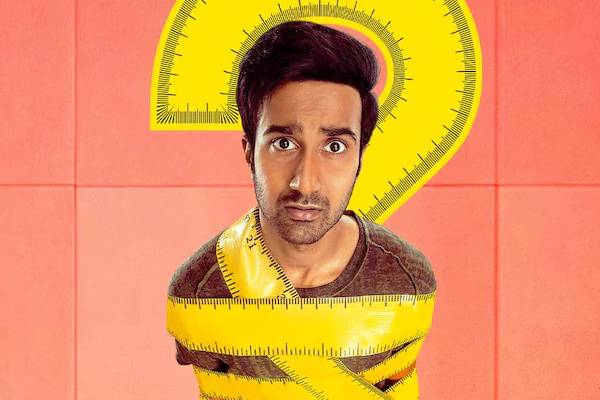 The trailer hints at the entire story and idea of Ek Mini Katha. Santosh (Santosh Shobhan) is a struggling youngster about the size of his private part. Santosh decides to resolve his problem but he gets forced to get married. The rest of Ek Mini Katha is all about the fun generated around the struggles of Santosh. Ek Mini Katha is a never-discussed script that has shades of adult content but doesn’t cross the line. Watch Ek Mini Katha to know if Santosh gets the right solution for his problem.

Santosh is worried about his small private part and is never focused on his studies. He gets graduated and does a small job. Santosh gets married to Amrutha (Kavya Thapar) and she has big plans in life. It is when the real struggles of Santosh starts. He postpones his plans of physical relationship with his wife. Ek Mini Katha is balanced with some emotional drama and entertainment that are generated well from the basic plot. Ek Mini Katha has many episodes that are narrated in a convincing manner, however most of them will not appeal to the family crowds. The adult content is laced with humor and sensible entertainment which makes Ek Mini Katha a decent watch.

The narration is impressive though has some boring forced episodes. The entire second half is focused on Santosh postponing his first night process. Sapthagiri’s comic episodes work partly and the emotional connect during the pre-climax is not well established. The climax portions are hurried.

Santosh Shobhan does the role of Santosh with utmost ease and he fits well. His expressions are adequate, delivers a good performance. Kavya Thapar is ok to watch and she did her part well. Sudharshan does a decent job and his role is entertaining. Sapthagiri tries hard to take the lead but his comedy looks repeated at times. Brahmaji does a decent job as Santosh’s father and Shraddha Das fails to make an impact. All the other actors did their part well.

Ek Mini Katha has a plot that is never discussed. The screenplay is decent and the entertainment, narration are the major USP of Ek Mini Katha. The dialogues are good and the background score is decent. Ek Mini Katha comes with a good technical team. The first half of Ek Mini Katha is entertaining while the second half is boring at times.

‘Ek Mini Katha’ works for the target audience on OTT platform. Though this film’s narration is entertainment oriented, it turns out to be boring and predictable at times. If released in theatres, Ek Mini Katha would have ended up disappointing one. You may try it on OTT