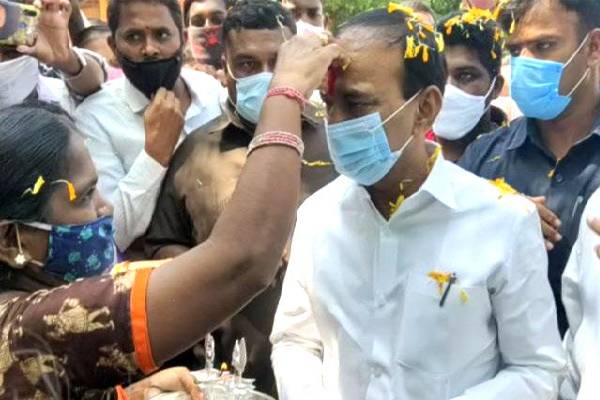 Sacked health minister Etela Rajender on Tuesday held a massive show of strength in his constituency Huzurabad, which is heading for bypoll soon.

Etela visited his constituency for the first time after he announced resignation to TRS and MLA post recently.

Etela received a grand welcome from his supporters and people in the constituency. Etela conducted road shows in several mandals of the constituency. People in large number thronged his roadshows which resembled like an election campaign.

Etela came down heavily on TRS and TRS leaders for hatching conspiracies to end his political life by levelling false land encroachment allegations.

Etela said KCR cannot win Huzurabad bypoll by distributing money and liquor to voters like he was doing in all the elections in Telangana as Huzurabad people are determined to teach KCR and TRS a fitting lesson in the bypoll.

Etela also lashed out at ministers for criticising him saying that they are not human beings but robots whose job is just to read the scripts send from Pragathi Bhavan.