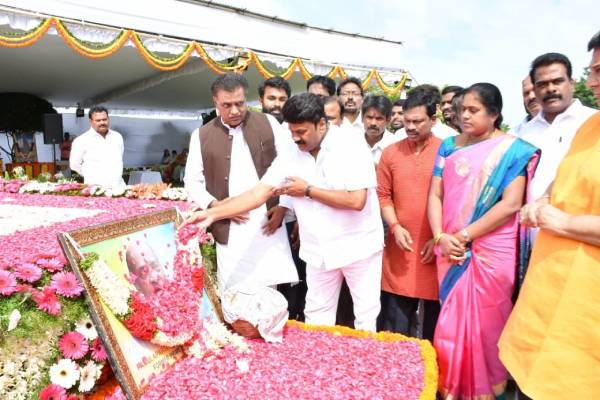 Srinivas Yadav said the late leader did not get the due recognition. He said the central government did not give him the honour which he deserved as a former Prime Minister and the architect of economic reforms.

The minister said no memorial was constructed for Narasimha Rao in Delhi. Both the previous governments and present government at the Centre have not honoured him and ignored the demands to confer Bharat Ratna on him, he said.

Srinivas Yadav recalled that the TRS government conducted year-long centenary celebrations as a befitting tribute to PV, as the former prime minister was popularly known.

Hailing from Vangara in Karimnagar district (now in Telangana), PV was India’s first and only Telugu Prime Minister. He also had the distinction of being the first prime minister outside the Nehru-Gandhi dynasty to complete a full five-year term.

PV, who also served as the Chief Minister of undivided Andhra Pradesh and as a Central minister, was known as a scholar, statesman, a polyglot and an author.

PV, who was elected to Parliament in 1972, held several cabinet posts under Indira Gandhi and Rajiv Gandhi including Foreign Minister from 1980 to 1984.

Described as “political Chanakya’ by many, PV managed to complete the full term despite being just short of a majority in Parliament.

Governor Tamilisai Soundararajan paid tributes to PV. “A learned scholar, administrator, writer and was blessed with remarkable knowledge and intellect. His services to United Andhra Pradesh as CM will be always remembered,” she tweeted.

Chief Minister K Chandrasekhar Rao also paid rich tributes to the departed leader. He praised PV as the son of the soil and an architect of modern India who protected India from the crisis by introducing economic reforms. India has witnessed economic growth through the reforms introduced by PV Narasimha Rao. Besides, the country also registered qualitative growth in nuclear power, foreign policy, internal security etc, he said in his message.

KCR, as the chief minister is popularly known, said that PV as the PM increased the country’s wealth manifold by his innovative policies. The Telangana state government has imbibed PV’s inspiration in the administration, he said.

KCR said that the development action plan implemented by Telangana government stood as a role model in the country. PV also proved that Telangana leadership has shown a path to the country, he said, adding that Telangana will move forward with the inspiration of PV.