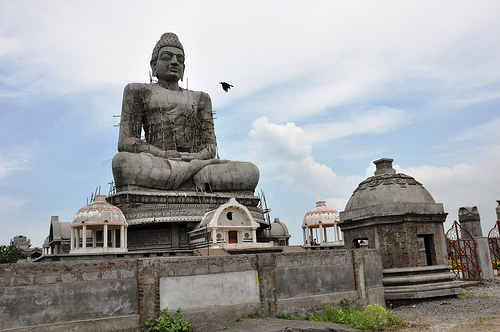 Foundation stone will be laid for the construction of new capital of Andhra Pradesh “Amaravathi” on October 22, 2015. The new capital is coming up in Guntur district on the banks of River Krishna. Similarly, works for Polavaram project also will commence from the same day. Andhra Pradesh cabinet has finalized these dates today. State government will invite Prime Minister Narendra Modi as the chief guest for the ceremonies. Similarly, the cabinet deiced to institute vigilance inquiry into the large scale misappropriation of funds in the housing program for the poor during Congress regime spanning  between 2004-2014. According to labor minister K Acchannaidu, who briefed media about the cabinet decisions, about Rs 5,500 cr have been misappropriated in the housing program meant for the poor during the Congress regime. “The then government had claimed to have constructed 41 lakh houses. In a study done by the cabinet committee, it was found that about 15 lakh houses are non-existent. But, the bills have been cleared by the government. There are instances where same person had been allotted five to six houses. We have decided to institute vigilance inquiry. The government doesn’t hesitate to recover money swallowed by the people responsible for the loss to the exchequer under revenue recovery act,” Naidu said. From now onward, the government will have a uniform e-mail policy. “Government will create a new email address  and all government functionaries from top CM to down to the village assistant, have to communicate through this mail id only,” he added.