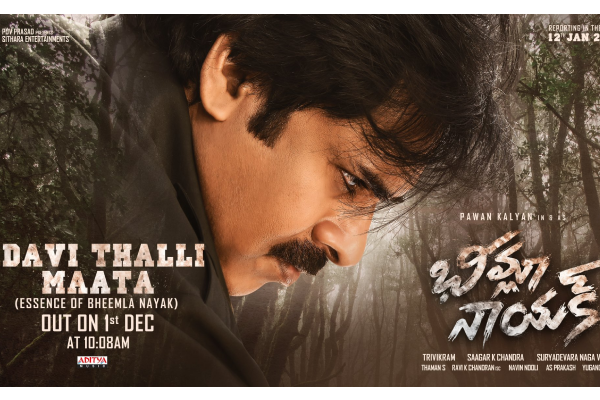 Pawan Kalyan’s highly anticipated Telugu multi-starrer ‘Bheemla Nayak’ is all set for a huge release soon and the makers have announced the release of another interesting single from the action drama.

With a few songs released by the makers, the music album has been a huge hit so far.

“It’s time to take in the #EssenceOfBheemlaNayak #AdaviThalliMaata, 4th single from #BheemlaNayak out tomorrow at 10:08 am,” the makers Tweeted on Tuesday.

S.S. Thaman is the music director, while Ramjogayya Sastry has penned the lyrics for the upcoming song.

Nithya Menen plays the female lead opposite Pawan Kalyan, while Samyukta Menon plays Rana Daggubati’s partner. Murali Sharma and others are among the rest of the cast.

Directed by Sagar K. Chandra, the movie is an official remake of Malayalam hit ‘Ayyappanum Koshiyum’. Trivikram Srinivas pens the screenplay and the dialogues for ‘Bheemla Nayak’.