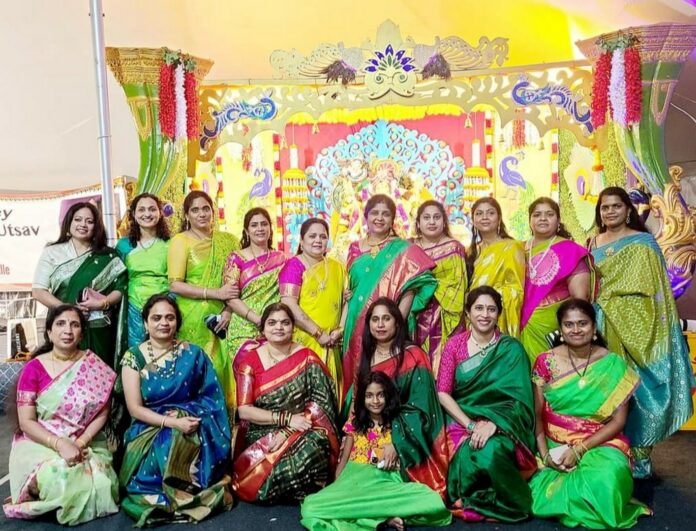 Foxvalley Ganesh Utsav Samithi celebrated the Ganesh festival with pomp and gaiety for the sixth year in a row. FVGUS started the first Public Ganesh celebrations in Chicago area in 2016 and is continuing the tradition. The devotees thronged the pandal to witness the daily religious rituals, bhajans and cultural programs. Kids performances were the highlight of the event.

Daily Maha Aarthi was witnessed by thousands of devotees daily and they all enjoyed the prasadam after the aarthi. The decorations gave an aesthetic look with a beautiful backdrop of the Peacock theme, the rituals performed at the altar, the traditional attire of devotees involved in doing bhajans is hard to describe in words.

Ganesh Visarjan on the final day was performed with religious fervor, adults and kids danced to the drum beats and music. Maharashtra Mandal team performed the Dhol Tasha during the visarjan which was the highlight of the final day.

Mayor of Aurora Richard C. Irvin signed a Proclamation that every 10th September will be recognized as Ganesh Chaturthi, a prominent festival in the Hindu tradition. This is a huge endorsement for Fox Valley Ganesh Utsav Samithi’s efforts.

Vijay Kothakonda, President FVGUS has thanked the thousands of devotees who visited the pandal during the 3 day event from Sep10th to 12th. He thanked the sponsors and donors for their generous donations. He also expressed deep gratitude to the volunteers and mentioned that the event would not have happened without their hardwork.