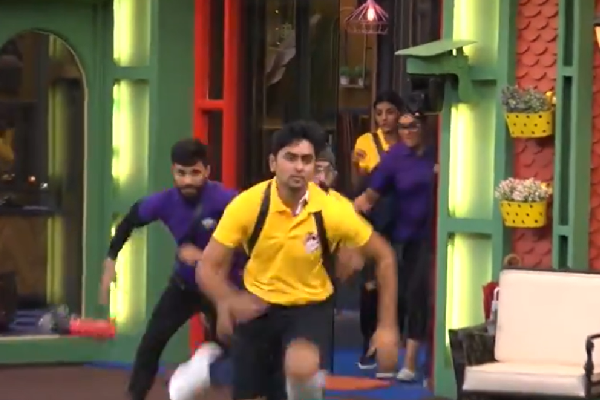 Today’s episode started with housemates reconciling with each other after the nominations. Bigg Boss later gave a physical task to the housemates. Housemates were divided into eagles team and Wolves team yesterday during the nominations. The same teams will be fighting with each other today. As always, physical task in Bigg boss house engaged the audience.

During the physical task, women contestants complaining on some men for touching them inappropriately during the task is one regular theme in Bigg boss. During season 2, there was a big fight between Bhanu and Kaushal on the same topic. Today, Siri complained Sunny touching her during the task. But Sunny didn’t touch her and he only helped Swetha fight with Siri. It seems Siri intentionally tried to damage Sunny image.

Lobo, though entertaining the house, could not play well in physical game. He felt dizzy after some time and this team mates tried to help him. Ravi, who is from opposite team alleged that this is all drama and Vishwa from Lobo team objected this comment and it led to argument between Ravi and Vishwa.

Housemates who didn’t open till now opened up today:

Housemates like Sriram, Shanmukh, Manas who have been maintaining low profile till now opened up during the physical task. Especially Sriram showed anger on Kajal during the task. Manas proved again that he can talk rationally even in the midst of high voltage altercations.

The task will continue tomorrow.