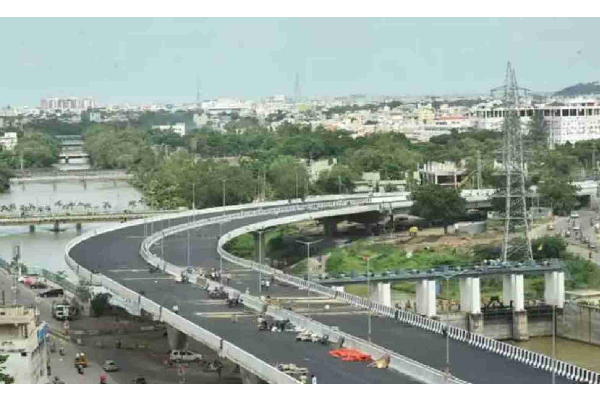 The 2.3-km long Kanaka Durga Temple flyover will be thrown open to public use from today. Union Minister Nitin Gadkari and AP Chief Minister YS Jaganmohan Reddy will inaugurate the historic flyover online. The inauguration is scheduled now a day ahead of the start of the Durga Navaratri Utsavams at the temple. As is well known, the flyover has been a long-standing dream of the people of Vijayawada considering its vital importance in solving the frequent traffic congestion in the National Highway passing adjacent the hill temple.

The Durga flyover now curves around the Indrakeeladri hill atop which is located the Kanaka Durga Temple. This is expected to ease traffic jams in the temple surroundings by solving the heavy and high volume traffic from Hyderabad entering into Vijayawada and moving towards Chennai and vice versa. The flyover is built with advanced technology and has got a four lane road to meet the needs of highway traffic.

The flyover starts from Bhavanipuram flies alongside the Krishna river, Kanaka Durga Hill Temple and over the Buckingham canal to land on the highway near Pandit Nehru Bus Station near the Prakasam barrage. Rival political parties claim credit for completing the flyover in accordance with the wishes of the local people. The project was begun in 2010 but real progress in works began in 2015. For various reasons, there was inordinate delay. Finally, the historic flyover is now being made available for public use.

The leaders of Telugu Desam Party claim that 70 per cent works were completed in its previous regime. The YCP leaders say that their party has successfully completed what the previous rule could not do. Whereas, the BJP leaders asserted that their party’s Central Government has provided funds and ensured completion of the project.