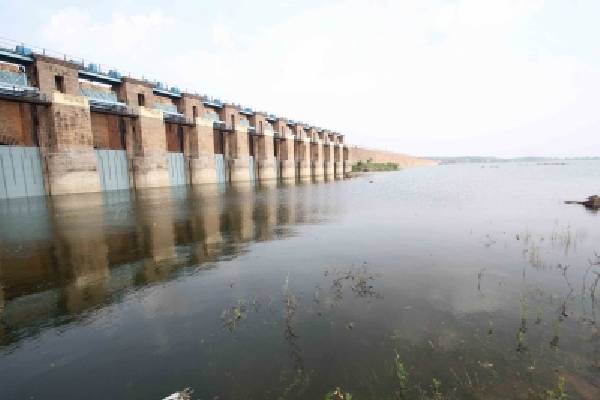 Authorities in Telangana on Tuesday opened two gates of Hyderabad’s Himayat Sagar as the incessant rains increased the water level in the reservoir drastically.

Hyderabad Metropolitan Water Supply & Sewerage Board (HMWS&SB) officials opened two of the 17 gates of Himayat Sagar to let water into Musi river, which runs through Hyderabad.

With rains continuing in the catchment area of Himayat Sagar, 2,000 cusecs of water was flowing into the reservoir.

According to HMWS&SB, the reservoir capacity is 2.97 TMC while the water level on Tuesday morning was 2.837 TMC.

The authorities had opened the gates of both Himayat Sagar and Osman Sagar reservoirs last month.

This is also the second consecutive year that the gates of Himayat Sagar have been opened. In October last year, when massive floods had wreaked havoc in Hyderabad, 13 gates were opened.

Earlier, it was in 2010 that the gates of Himayat Sagar were lifted to release flood water into the river.

Meanwhile, a bus of state-owned Telangana State Road Transport Corporation (TSRTC) was washed away in flood waters in Rajanna Sircilla district. There was no loss of life as all the passengers were already rescued by the locals.

The bus was caught in flood waters near Maneru Vaagu low level bridge on Sunday. After all passengers were rescued, the rescue workers tried to pull out the vehicle with the help of a JCB but failed. The bus got washed away in flood water and got stuck in the middle of the stream.

Heavy rains lashed north Telangana on Tuesday. Some low-lying colonies in Warangal town were inundated. Rain water entered the houses in some parts of the town, causing severe inconvenience to residents.

Incessant rains also led to flash floods in Nizamabad district. Rivulets, lakes, tanks and other water bodies were overflowing. Officials said some villages were cut off as roads were submerged.

A similar situation prevailed in Nirmal district. Medarawada was marooned due to incessant rains since Sunday. Rescue workers shifted the stranded people to safe places.