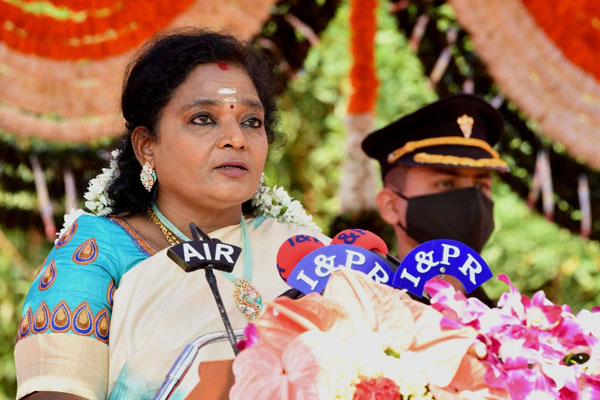 The Telangana cabinet meeting chaired by Chief Minister K.Chandrashekar Rao approved nomination of Padi Kaushik Reddy as MLC under Governor’s quota on August 1 and sent it to Governor for approval on the same day.

But Governor kept her approval on hold even after more than a month. However, she has maintained complete silence on this issue since then.

The governor on Wednesday (today) broke her silence on this issue for the first time.

She said that she was not happy with the Telangana government nominating Kaushik Reddy under Governor quota under social service category.

Governor said she will examine what social service Kaushik Reddy did before giving her approval. She further said that she will take more time to take a decision on this issue.

Already one month and one week passed since Kaushik Reddy’s name was sent to Raj Bhavan for approval and Governor seeking more time to give her nod reportedly angered CM KCR, who is waiting for the right time to strike against Governor if she rejects Kaushik’s nomination.

36-year Kaushik Reddy is a cricketer who flayed first class matches for Hyderabad and later entered politics. He joined Congress and contested against then TRS candidate Etela Rajender in Huzurabad in 2018 Assembly polls and lost. However, after Etela quit TRS and joined BJP in June this year forcing bypoll in Huzurabad, Kaushik Reddy quit Congress and joined TRS in July. KCR nominated him as MLC within ten days of joining TRS.