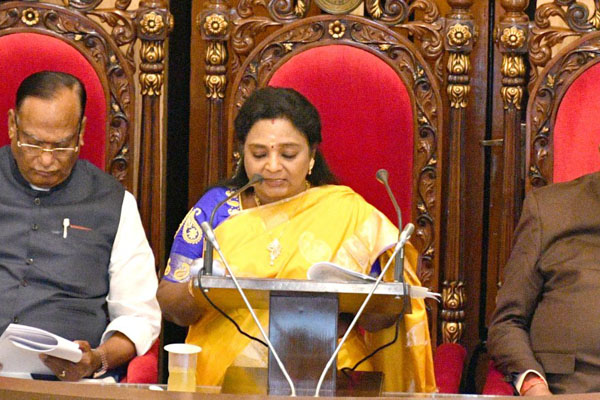 Telangana Governor Tamilisai Soundararajan in her maiden address to the joint session of the Telangana Legislature on Friday showered praises on Chief Minister K Chandrasekhar Rao. She listed out the achievements of TRS government ever since it assumed office in the new state of Telangana in June 2014.

She said, “The greatest advantage for Telangana State is that the leader who led the separate statehood movement himself became the Chief Minister of the newly formed State and leading it from the front and getting marched towards the path of progress and development. The Telangana Society, which was destroyed in all the sectors during the united Andhra Pradesh rule, now under the visionary and dynamic leadership of Chief Minister Sri Kalvakuntla Chandrasekhar Rao has been moving forward with perfect planning, sincerity and commitment, ever since he took over the reigns of State six years ago. I have no doubt that this forward movement is yielding good results now.

The governor added, “After continuous and relentless struggle for six decades, the Telangana society could able to achieve a separate Statehood. The Telangana state achieved wonderful progress in several sectors and became number one State in the Country within a short span of time. This is something, I am sure we all should rejoice and feel proud of.”

She went on to say, “If we make a comparison of the situation that existed when the Telangana State was formed and now, the delightful achievements and success, the state achieved in such a short span of time is being observed with admiration by the entire country.”

She said Telangana faced crisis in each and every sector in Undivided Andhra Pradesh.

“Under these trials and tribulations, on 2nd June, 2014, the Telangana State started its journey, under the foresighted leader, who successfully spearheaded the separate statehood movement. Under the stewardship of Chief Minister Sri K. Chandrasekhar Rao, my Government after taking into consideration, its resources, facilities, needs, advantages, disadvantages, strengths and weaknesses, had prepared short-term, medium-term and long-term plans for the overall development of the State and thus launched State’s revitalization and rejuvenation process,” the governor remarked.