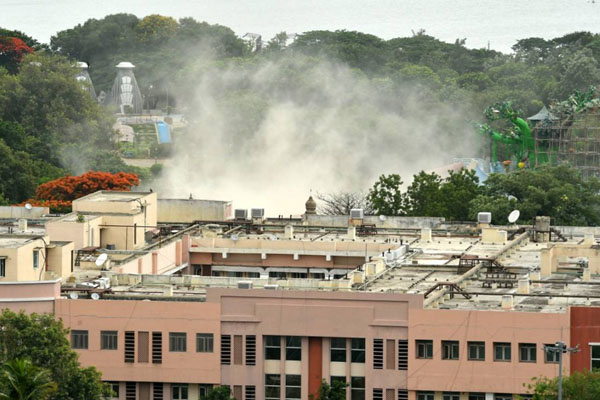 After the Telangana High Court last week gave its nod to demolish the old Secretariat building complex at Saifabad, the historic building on Tuesday has been razed to the ground.

The demolition of the old Secretariat, spread over 25.5 acres with 10 blocks, began in the wee hours of Tuesday. High-end JCB vehicles were pressed into services to bulldoze the 10 blocks of the old Secretariat. The area has been cordoned off with the city police erecting barricades on the roads that lead to Secretariat. Vehicular traffic came to a standstill as the lanes around Secretariat were barricaded. Secretariat employees operating from temporary offices at BRK Bhavan near the old premises were given a day off.

The decades-old building had been the seat of power for decades.

Of the 10 blocks, the most famous were the G Block (Sarvahitha) from where N T Rama Rao discharged duties as chief minister. During the tenure of Marri Channa Reddy, two more blocks – B and C – were constructed. Channa Reddy operated from the C Block. When Chandrababu Naidu was the CM, the H Block which was constructed during the Nizam’s time was demolished. Further, the Nizam era G-block, also called Peshi, was razed to the ground. Mir Osman Ali Khan, seventh Nizam and the last ruler of erstwhile Hyderabad State, was instrumental in the construction of Saifabad Palace in the sprawling old Secretariat complex in 1888. Built in European architecture, Saifabad Palace served as the office of Nizam”s Prime Minister till Hyderabad”s accession with the Indian Union in 1948.

With the demolition of the old Secretariat, the KCR government will now be focussing on building a new structure at a cost of around Rs 400-Rs 500 crore after the state Cabinet approved construction of a new building on June 19, 2019. Chief Minister K Chandrasekhar Rao had already laid the foundation stone for the new Secretariat complex on June 27, 2019. Later, the secretariat was shifted to BRK Bhavan.

The High Court last week gave its approval for construction of the new Secretariat, after protracted hearings lasting more than a year. The new Secretariat, with five-six lakh sq ft built-up area, would be constructed at the existing premises next to the Hussain Sagar.

The High Court had recently dismissed a bunch of petitions challenging the KCR government’s decision to construct a new Secretariat complex by demolishing the existing one. The petitioners, including Congress leader Revanth Reddy and retired professor P L Visheshwar Rao, had argued that construction of a new Secretariat would cause an additional burden on the state’s exchequer. However, the KCR government underscored the need for a new building as the city expanded.