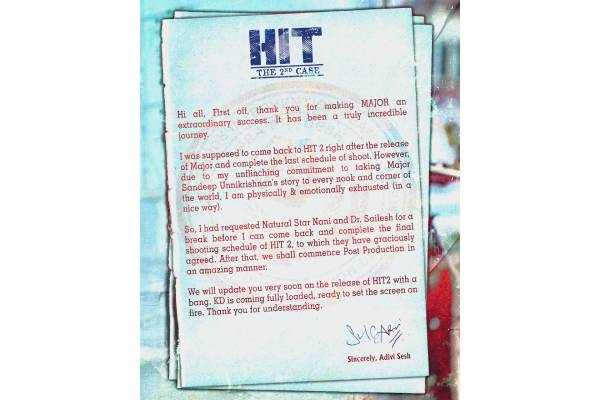 Talented actor Adivi Sesh, who won over audiences with the blockbuster successful film Major (based on the biography of Major Sandeep Unnikrishnan), is slated to make a comeback on the big screen after a month with HIT 2. When the movie’s release date was recently set as July 29, no promotion was done.

The lead actor Adivi Sesh confirmed the news today with a reason letter to his fans. Letter reads “I was supposed to come back to HIT 2 right after the release of Major and complete the last schedule of shoot. However, due to my unflinching commitment to taking Major Sandeep Unnikrishnan’s story to every nook and corner of the world, I am physically & emotionally exhausted (in a nice way).”

“So, I had requested Natural Star Nani and Dr. Sailesh for a break before I can come back and complete the final shooting schedule of HIT 2, to which they have graciously agreed. After that, we shall commence Post Production in an amazing manner. We will update you very soon on the release of HIT2 with a bang.”

In the second instalment, Adivi Sesh plays Krishna Dev nicknamed KD in the sequel, which is set in Andhra Pradesh.

The second part of ‘HIT’ (Homicide Investigation Team) will be produced by stylist Prashanti Tipirneni and presented by actor Nani under the Wall Poster Cinema banner. The sequel to Adivi’s ‘HIT’ will be directed by Sailesh Kolanu and will have the same cast.