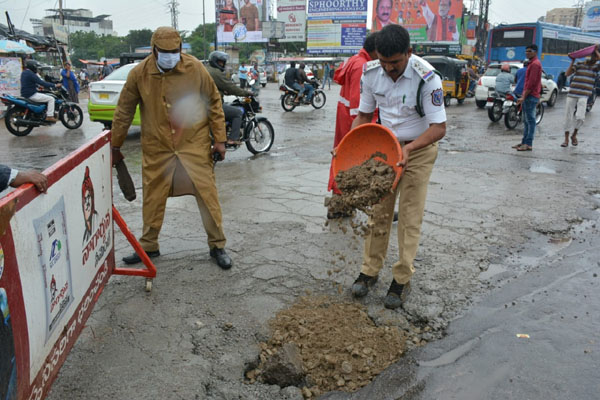 Hyderabad police on Thursday filed a case against officials of the Greater Hyderabad Municipal Corporation (GHMC) on a complaint by a citizen, who was injured after falling in a pothole on the road.

Journalist Syed Azmath Hussain Jaffery lodged a complaint at Dabeerpura police station in the old city. On his complaint, police registered a case against GHMC officials under Section 338 (causing grievous hurt by act endangering life or personal safety of others) of the Indian Penal Code (IPC).

The complainant stated in his petition that he was injured after falling in a pothole on the night of October 6 in Noor Khan Bazar area, and his right ankle was fractured in the incident.

He alleged that the negligence by GHMC authorities endangered the lives of the citizens.

The incident highlighted the bad condition of the roads in the city. Jaffery received online support from citizens for taking the bold step of lodging a complaint against the municipal authorities.

Incessant rains have badly damaged roads in several parts of Greater Hyderabad. GHMC is under flak for not carrying out the repairs.