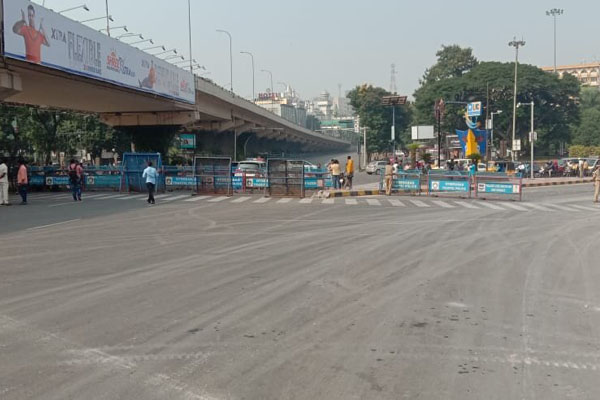 Tank Bund and other major roads surrounding Hussain Sagar lake in the heart of Hyderabad were out of bounds for people on Saturday as police sealed the area to foil the march planned by striking employees of Telangana State Road Transport Corporation (TSRTC).

People going to offices and workplaces, students and other commuters faced hardships in reaching their destination as the major road linking twin cities of Hyderabad and Secunderabad and all connecting arteries were barricaded.

Tank Bund, Lower Tank Bund, Telugu Talli Flyover, Indira Park Road, Secretariat Road, Necklace Road, Khairatabad Flyover and all other roads leading to the lake were sealed by the police, which has denied permission for the protest. Hundreds of policemen were deployed around the lake to prevent protestors from reaching the area, a popular picnic spot.

NTR Park, Lumbini Park, Indira Park and Sanjivaiah Park around Hussain Sagar were closed for visitors as a precautionary measure.

Joint Action Committee (JAC) of TSRTC employees has called for ‘chalo Tank Bund’ as part of their ongoing strike to press for their demands. The police, however, refused to give permission for the march on the ground that this could disturb law and order in the city.

JAC leaders, however, vowed to go ahead with the protest planned on the lines of million march held in the same area during Telangana movement. All opposition parties and Osmania University students’ groups have declared support to the protest.

Police took several leaders of TSRTC employees and the opposition parties into preventive custody or placed them under house arrest across the state. The arrests were made since Friday evening.

Police also set up check posts at the entry points into Hyderabad to prevent TSRTC employees from entering the city.

The strike by over 48,000 TSRTC employees entered 36th day on Saturday. Their demands include merger of TSRTC with the government.

However, taking a tough stand the Telangana Rashtra Samithi (TRS) government rejected the demand for merger and even announced privatisation of half of the TSRTC routes.

Though Telangana High Court on Thursday directed the state government to take initiative to resolve the employees’ demands, no end to the stalemate appears in sight as both the sides are sticking to their stand.