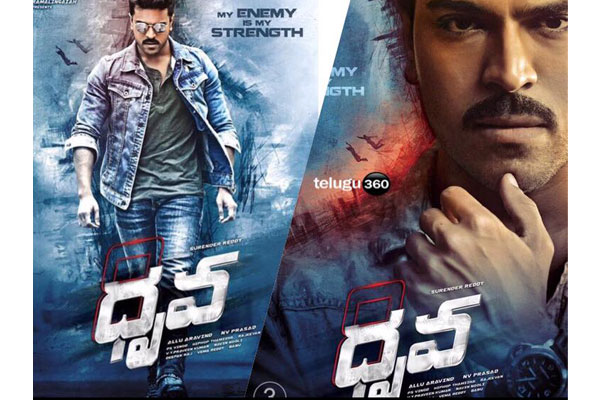 Mega Powerstar Ram Charan and hotshot filmmaker Surender Reddy are looking to bounce back strongly with their upcoming stylish action drama Dhruva which is tipped to be official remake of Tamil hit Thani Oruvan. The Telugu version will see sensible changes to suit the audience here. The supporting cast has been bolstered with the inclusion of popular actor Aravind Swamy who is reprising his role from the original.

As announced earlier, the first look posters from the film have been unveiled today on the eve of Independence day. Ram Charan is seen sporting an ultra stylish and intense look in these two posters. Interestingly, it is the design of the title that raised the curiosity of the audience. Charan is playing a dynamic IPS officer in the film which also features Navdeep in important role.

Rakul Preet Singh is the female lead. Geetha Arts banner is bankrolling this film which aiming of Dusheera release.