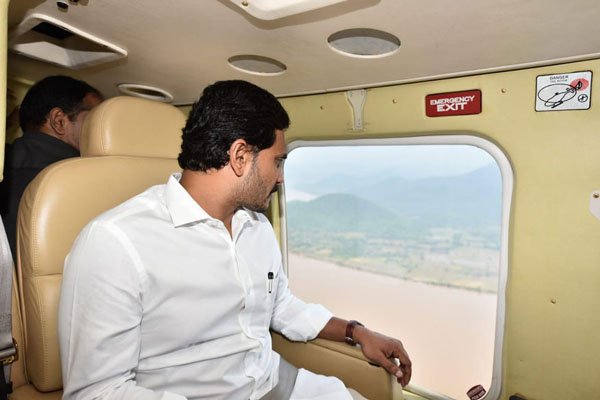 Chief Minister Jagan Mohan Reddy on Tuesday made aerial survey of flood affected areas of the state to take stock of the prevailing situation.

Jagan Mohan Reddy had conducted an aerial survey of flood-affected areas near the Godavari, particularly those inundated near Polavaram and West Godavari district.

The water level has started to recede at Bhadrachalam and a third warning is likely to be withdrawn in the afternoon.

Earlier, Jaganmohan Reddy held a meeting on flood through video conferencing with the collectors of East and West Godavari districts. He instructed officials further step up relief works among flood hit areas.

The chief minister instructed the district administration officers to distribute relief material in the flood-affected villages and to shift the people to a safer place. The officials were also directed to arrange for the medical facilities and fodder for cattle in the affected areas.

CM has instructed authorities of East and West Godavari districts to disburse gratuitous relief of Rs 2,000 each to flood-affected families and to estimate damages within 10 days.