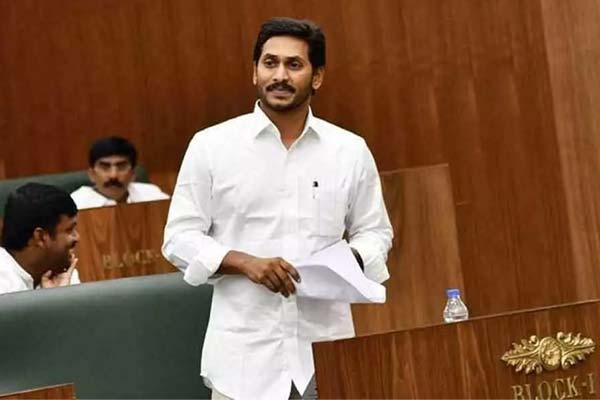 Chief Minister Y S Jagan Mohan Reddy targeted his rival and opposition leader N Chandrababu Naidu during his address in the Assembly on Thursday. He spoke on the motion of thanks to the Governor’s address to the joint session of Assembly on the first day of the budget session.

Jagan Mohan Reddy came down heavily on the TDP for protesting during the Governor’s address and called them irresponsible opposition. He felt that the opposition TDP should have respected the Governor giving respect to his age and the position he was holding.
The chief minister equally targeted the media, naming them on the floor of the house and branding them serving the interests of Chandrababu Naidu rather than the interests of the people. He chided the media houses taking strop exception accusing them of mortgaging the press freedom to the TDP chief.

Jagan Mohan Reddy listed out every programme of his government one after the other and in every programme, he drew comparison with the TDP regime. In every scheme he mentioned in the speech, he blamed the TDP chief and the media.

He looked as if he was prepared for a direct and hard-hitting verbal war with Chandrababu Naidu and the media in the days to come. Two years ahead of the 2024 general elections, Jagan Mohan Reddy sounded clear on his rivals and he named them without hesitation.

If his speech in the Assembly is any indication, it is clear that Jagan Mohan Reddy would be going to the people declaring war against Chandrababu Naidu, Ramoji Rao of Eenadu, Radhakrishna of Andhra Jyothi and Naidu of TV5.

It is to be seen how far he would succeed in this battle and how strong people would support him in the 2024 general elections.