Talking to the media here on Wednesday, Umamaheswara Rao felt that Mr Jagan Reddy has to bear the entire blame for ‘turning the Polavaram into a bane.’ The Polavaram Authority too has written to the State Chief Secretary on July 15, 2022 that Jagan Mohan Reddy is responsible for the delay in the completion of the project works.

The abnormal delay in the completion of the project is merely because the contractor and the Water Resources wing could not properly implement the plan. The State Government is totally neglecting the timely alerts given by the Centre, the former minister observed.

Also, Jagan Reddy did not heed the advice being given by the Centre for the past three years to constitute a managerial committee to supervise the works, Umamaheswara Rao said. The slow pace of project works is the primary reason for the submergence of the areas, he added.

The Centre several times pointed out that the delay in the completion of the project is only because of the faulty policies of Jagan Mohan Reddy, he stated. 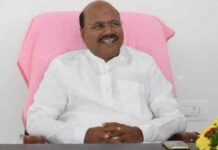